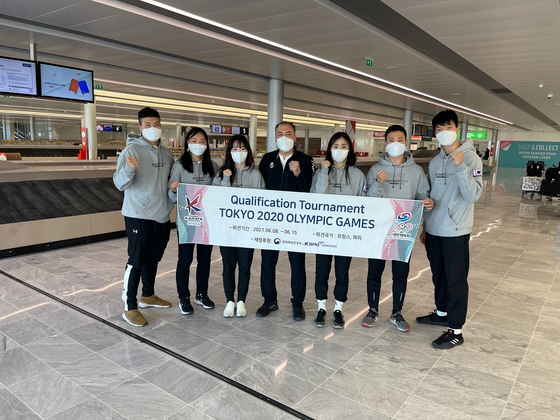 The national karate team arrives at the Paris Charles de Gaulle Airport on Tuesday to get ready for the Karate 2020 Olympic Qualification Tournament that takes place in Paris from Friday to Sunday. [KOREA KARATE FEDERATION]


Six Koreans hope to secure Olympic berths at the Karate 2020 Olympic Qualification Tournament in Paris from Friday to Sunday.

Karate makes its Olympic debut at the Tokyo Games where 40 female and 40 male karate practitioners, or karateka, will compete at eight events; men's and women's kata and men's and women's kumite events with three weight classes each.

Kata is a demonstration of offensive and defensive movements. Judges give points to one athlete based on an overall assessment of each technique.

In kumite, two karateka of the same weight class face each other in the tatami, a square competition mat, where athletes try to land blows on target areas of their opponent.

Attacks made with good form and control are awarded three points, the highest score possible per attack. A competitor wins if they outscore the opponent at any time by more than eight points, or finish the three-minute bout with more points. In a tie, the karateka who scored the first point wins. In a scoreless bout, the judges declare the winner based on performance.

Twenty-four Olympic berths are available via the qualifications in Paris, where six Koreans will be looking to fill six berths out of eight. Each country can register one athlete per category.

Team Korea is aiming to come in at at least third in each event as the three highest placed athletes in each event will automatically qualify for the big stage.

However, Korean karateka may be able to qualify regardless of whether they finish within the top three. If they are ranked the best athlete of the continent, they will can take the Asian continent berths for one man and one woman which are still up for grabs.

Ensuring the safety of participants has become more of a priority following the outbreak at the Asian Wrestling Olympic qualifiers in Almaty, Kazakhstan, in May, after which 29 Koreans tested positive for Covid-19.

In the Korean national karate squad, Park was able to get both Pfizer jabs before leaving for Paris, but the five others will get their second jabs after the qualifiers.

The World Karate Federation protocol states that all athletes will need to test negative in the PCR test 48 to 72 hours before on-site registration to get their accreditation, and referees, coaches and officials will take antigen tests before the start of the competition.