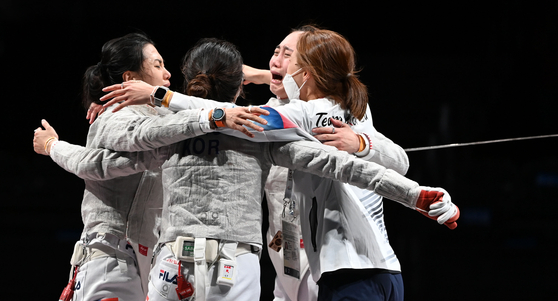 
The Korean women's sabre team beat Italy on Saturday to clinch the bronze medal, the first medal Korea has ever won in the event, at the Makuhari Messe Hall in Chiba, Japan.

Italy is undoubtedly a fencing powerhouse, with the Italian women's sabre team being the second best in the world while Team Korea sits at fourth. Kim Ji-yeon, Seo Ji-yeon and Yoon Ji-su were the ones to overpower the strong Italian team, pulling out a 45-42 win after a neck-and-neck match, with Choi Soo-yeon looking on from the bench.

The Italians led the match from the start, outscoring Korea by 10 points until the fifth of nine bouts. Just when it seemed the lead was insurmountable, Yoon came on the piste to start Korea's huge comeback. 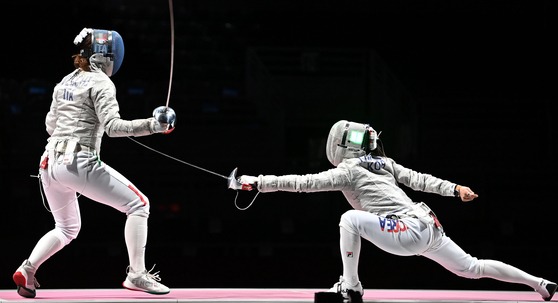 
Yoon narrowed down the point difference to four and Seo built on that momentum, ending her last bout two points ahead of Italy. Yoon held on to that lead handing it over to veteran Kim Ji-yeon to finish up the last bout.

In team events, the last member has the biggest and most demanding job, shouldering the burden of making up for the team's deficit or trying to keep a surplus till the very end, while the opponent is also desperate to do the same.

But Kim Ji-yeon, the most experienced ace fencer of the team, knew just what to do, ending the last act with a big lunge to outpace the Italian and clinch bronze. 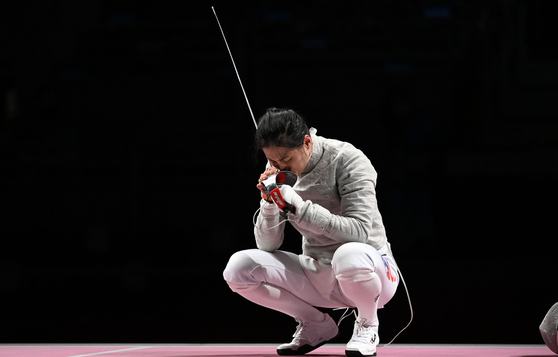 Kim Ji-yeon kisses her sabre after scoring the last point of the bronze medal match against Italy on Saturday at the Makuhari Messe Hall in Chiba, Japan. [JOINT PRESS CORPS]


Kim Ji-yeon is the only Korean medalist in women's sabre, winning the gold medal at the 2012 London Olympics. She stands at eighth on the world rankings.

Seo and Yoon are two-time Olympians, but this is the first Olympic medal for both sabrists. The Tokyo Games marks Choi's first Olympics. She played in Korea's first two matches against Hungary and Russia.

This team bronze rounds off the fencing events for Korea, as the only event left is the men's foil team event that Korea did not qualify for. 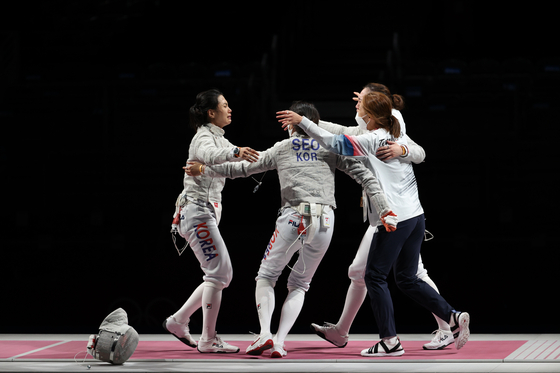 The Korean women's sabre team celebrate after winning the bronze medal against Italy at the Tokyo Olympics on Saturday at the Makuhari Messe Hall in Chiba, Japan. [JOINT PRESS CORPS]


At the Tokyo Olympics, Team Korea won medals in every team event it entered: Gold in men's sabre, silver in women's épée, and bronze in both men's épée and women's sabre.

All four team matches showed that the Korean fencers work better together. The matches offered some redemption to the fencers, all of whom dropped out of their respective individual tournaments without medaling, with the sole exception of Kim Jung-hwan, who won the men's individual sabre bronze medal.

Yoon, Choi and London gold medalist Kim Ji-yeon all dropped out of the round of 16 in the women's individual sabre contest, all finishing their second individual match with a close 15-12 score.

The Tokyo Games marks a big return to form for Korean fencing with the team bringing home a total of five medals: One gold, one silver and three bronze medals.

At the 2016 Rio Games, Korea only won two medals: A gold in men's épée won by Park Sang-young and a bronze in men's sabre won by Kim Jung-hwan. The best Korea has ever done was at the 2012 London Games, when the team won a total of six medals: Two gold, one silver and three bronze.