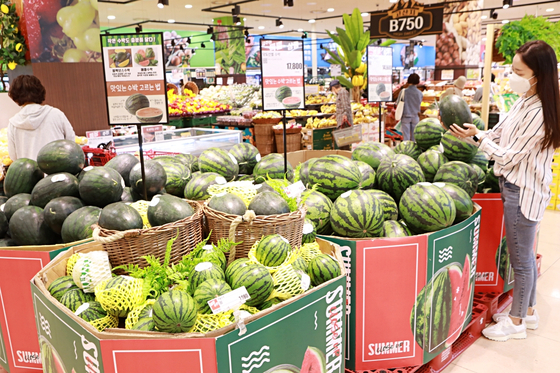 Lee Eun-jin was surprised recently by the size of watermelons at a supermarket near her home.

“Watermelons are getting smaller,” the 40-something housewife exclaimed. “When I was young, my mom used to buy watermelons that were as big as her head.”

Watermelons are favored by Koreans during the summer season, especially between May and August. On average, each Korean ate 8.5 kilograms (18.7 pounds) of watermelons last year, according to the Korea Rural Economic Institute, making it the second most popular fruit.

Tangerines were No. 1, with the average Korean consuming 12.8 kilograms in 2020. 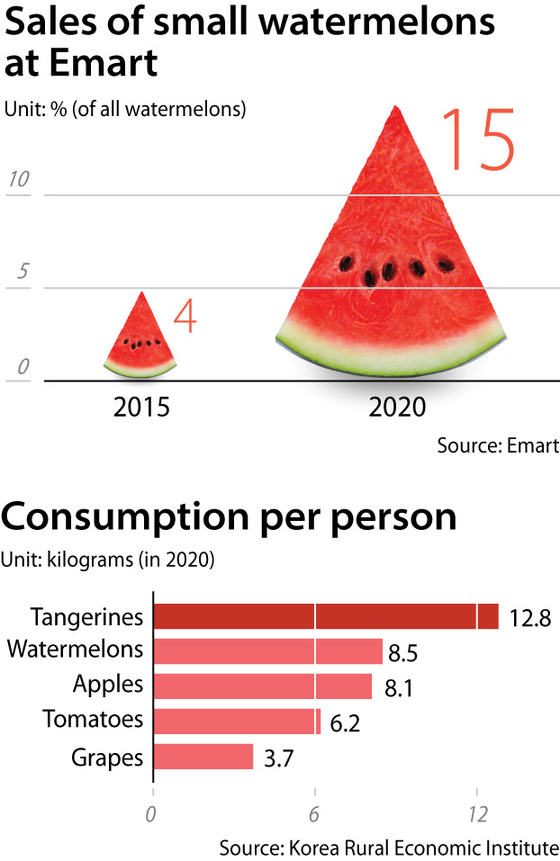 According to Emart, of all watermelons it sells, about 15 percent are them are mini-sized watermelons that weigh less than five kilograms. That’s around a four-fold increase compared to 2015, when the rate was only four percent.

At Lotte Mart, sales of small-sized watermelons that weigh less than three kilograms accounted for 7.6 percent of total watermelon sales in 2020 from 4.4 percent the previous year.

The increasing number of single-person or two-person households are a driving force behind the huge popularity of small watermelons.

“As single-person or two-person households are becoming more common in Korea, smaller watermelons are getting attention of customers,” said a spokesperson for Emart.

There were a total of 9.06 million single-person households in Korea in 2020, up 6.77 percent on year, according to data from the Ministry of the Interior and Safety.

About 62.6 percent of all households in Korea were single-person or two-person households as of end of 2020.

“In the past, big-sized watermelons weighing eight to 10 kilograms were popular as family members used to gather all together to share them,” said Shin Han-sol, a watermelon buyer at Lotte Mart. “But these days, consumers no longer prefer big watermelons.”

Retailers are scrambling to increase their watermelon inventory. 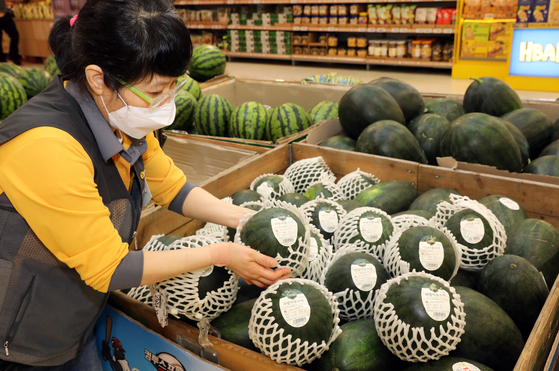 
Lotte Mart has opened a separate section in its stores across the country that display various types of watermelons, including black diamond watermelons and apple watermelons.

Homeplus is targeting customers with watermelons that have a high sugar content.

“We’ve only been selling watermelons that have high sugar content,” said a spokesperson for Homeplus. “We choose watermelons that were planted with special methods so that they taste sweeter than others.”