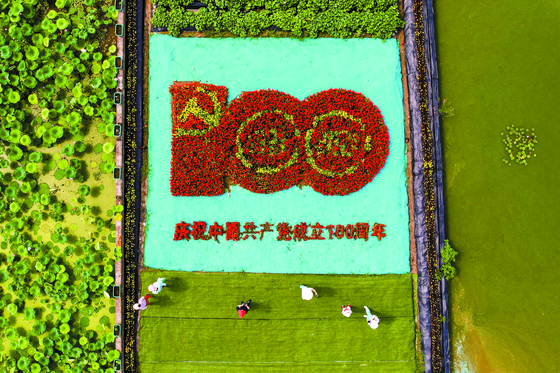 A flower garden in Hangzhou celebrates the 100th anniversary of the founding of the Communist Party of China (CPC). [AFP/YONHAP]


SHIN KYUNG-JIN
The author is the Beijing bureau chief of the JoongAng Ilbo.


Helene Landemore, a professor of political science at Yale University, recently challenged her students to design a constitution for Mars. The intriguing assignment was proposed by a columnist from the Financial Times.

Today’s young generation did not prescribe an American-style democracy based on an elected legislature for the planet. The class proposed “mini-publics,” or civilian assemblies made up of randomly selected citizens. They would make laws on economic, social, environmental policy, civil rights, government oversight and interstellar relations. They desired the Martian system to be a republic.

They were rejecting the Earth’s electoral democracies dominated by a small group of rich and elite people. Randomly selected 250 Martian citizens would become responsible for making laws and policies in six divisions. And each “mini public” would elects 50 representatives to allow them to participate in the deliberation of a central legislative body to examine the government’s budget, pass laws, or veto them.

The professor has been a vocal supporter of open democracy. Populism is another cause for distrust in elections. As politics must reflect diverse views, diverse opinions are better when trying to solve hard problems than a bunch of smart people who think the same way, the professor claims.

The Constitution of the Communist Party of China (CPC) is also an exotic constitution in the traditional democratic context. China claims to be a republic but places the party constitution above the nation’s constitution. It also rejects representative democracy.

The CPC, which will be 100 years old soon, is based on “democratic centralism.” The 25-member politburo sits at the peak of the rigidly structured hierarchy. It controls the Central Committee of 204 members, which is elected by the National Party Congress with 2,290 members. The Congress has delegates of 91.91 million and 1.4 billion Chinese are members of party cells and primary party organizations. A small group of party elite command the entire population and its politics.

Korea and China will pick new leaders next year. The young Chinese are not the same as in the past. The young generation in America proposed a civilian participatory democracy. The young in Korea will cast votes in the next presidential election in March. I hope our politics visualizes the future of the country that can meet their desires.