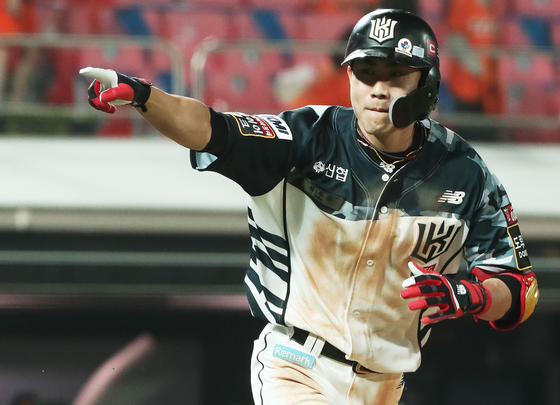 KT Wiz infielder Shim Woo-jun rounds the bases after hitting a tying home run at the bottom of the ninth against the Hanwha Eagles at Suwon KT Wiz Park in Suwon, Gyeonggi on Friday. [YONHAP]


The KT Wiz have risen to the top of the KBO pile after another week of action that saw the SSG Landers tumble down to fourth place while the Kiwoom Heroes drop away from the tightly-contested top six and closer to the trailing bottom three.

The Wiz won the weekend's only sweep, beating the Hanwha Eagles 6-5, 7-2, 6-3 at home in Suwon. KT needed extra innings to get the job done on Friday, scoring the winning run at the bottom of the 11th, before settling in over the weekend.

The Wiz weren't the only team to find that a little home field advantage worked in their favor, with every club that played at home taking the win over the weekend. The one exception is the Lotte Giants, who were unable to complete their series due to game cancellations.

The LG Twins entered the weekend tied for first with the Samsung Lions, but slipped to second after giving up one game to the Doosan Bears in the Jamsil Derby. The Twins won the first game on Friday, scoring two runs at the bottom of the eighth to break the tie and take a 3-2 win.

The Bears returned with an explosive extra innings performance on Saturday, scoring five runs at the top of the 10th for an 8-3 win. The Twins took the rubber match, with a shutout performance led by starter Jeong Chan-heon for a 2-0 win.

The Lions also fell to second, winning their series against the NC Dinos but dropping the first game 5-4 after a ninth inning run gave the Dinos the W. The Lions came back to win 4-1, 5-3 over the weekend, holding on to second place and remaining just half a game behind the Wiz. 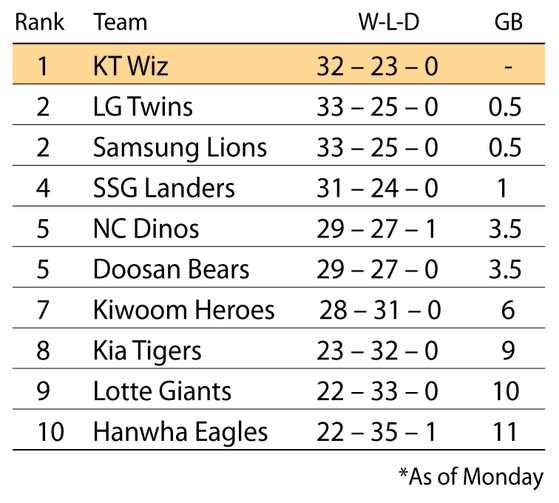 The Landers, league leaders a week ago, sit in fourth, one game behind KT. The Landers took on the seventh-place Kiwoom Heroes over the weekend, winning the first two games 8-6, 5-4 before the Seoul club was able to take one back on Sunday.

Despite the 7-3 victory on Sunday, the Heroes have continued to slip over the past week, remaining firmly in seventh place but inching closer to the bottom three teams and further away from the tightly-packed top six.

The order of the bottom three teams is slightly changed, with the Kia Tigers in eighth, the Lotte Giants now in ninth and the Eagles falling to tenth.

The Tigers and Giants were due to face off in Busan over the weekend, but games on Friday and Saturday were canceled due to rain. The two did play two games on Sunday, winning one each.

Starting Tuesday, the Lions will take on the Bears, the Wiz will face the Dinos, the Landers will head to Gwangju to play the Tigers, the Twins will play the Heroes and the Giants and the Eagles will face off in Daejeon.