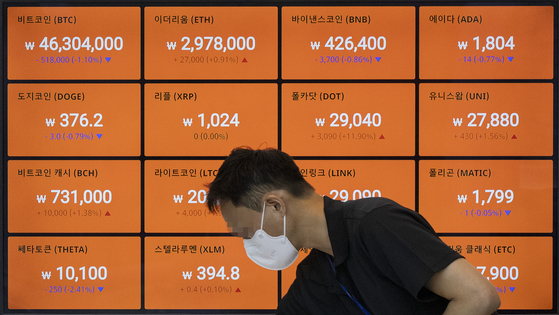 Digital screens operated by Bithumb shows prices of cryptocurrencies on Tuesday in Ganganm District, southern Seoul. On Tuesday. Bitcoin traded at $40,500 as of 4:30 p.m.Tuesday, up 2.78 percent from 24-hours ago, according to data from CoinMarketCap. [YONHAP]

Cryptocurrency trading on Upbit collapsed after the exchange announced the possible delisting of certain coins, with volume down about 90 percent on month and the prices of the coins targeted plunging.

The plunge in trading volume came after the exchange announced Friday it placed 25 cryptocurrencies, including komodo (KMD), adex (ADX), and lbry credits (LBC), on its investment warning list, a first step before delisting the coins from the exchange. The exchange said the coins fell short of internal guidelines on technical competence and global liquidity.

In a separate announcement Friday, the exchange said it will no longer support trading of five coins -- maro (MARO), paycoin (PCI), observer (OBSR), solve.care (Solve), and quiztok (Qtcon) -- on its Korean won market from June 18, saying the coins fell short of requirements. Trades in these coins can no longer be settled in won.

Trading of the five coins is still possible via bitcoin, but as most of the local investors trade digital assets for national currencies, trading of the coins could also fall.

Prices of the coins named by Upbit plunged after the announcement.

Paycoin fell by 39.32 percent on Friday last week. On Saturday, its prices slid by another 31.69 percent.

Komodo’s price dropped 19.23 percent on Friday. On Saturday, it fell another 11.36 percent.

While the recent general weakening of cryptocurrencies has already dampened the crypto craze, Upbit's plan to purge coins further drove down trading volume. As some of the coins that will not be supported by Upbit are still supported on other exchanges, investors could move to other exchanges to cash out their coins.

Investors of the named digital assets and developers of the assets are complaining about Upbit’s sudden announcement.

"On June 11, Upbit suddenly announced a notice of removal of the digital asset from KRW market pair with no good reason or convincing notice," Quiztok announced in statement Monday using the acronym for the won.

Some coin projects not mentioned by Upbit are also releasing statements ahead of the possible delisting of other coins.

"As many projects listed on Upbit have been flagged with investment warnings, some rumors have spread the medibloc will be the next to receive a warning," medibloc’s developer said in statement Saturday. "Just as medibloc has been running for four years, we will continue to make efforts to be a patient-centered medical information platform. Therefore please refrain from spreading rumors."

Probit, Huobi Korea and Foblgate, other exchanges in Korea, have also been purging coins.

The moves come as the exchanges hope to partner with banks that agree to offer bank accounts in the name of the actual trader for trading on the exchanges. After an amendment to the Act on Reporting and Using Specified Financial Transaction Information took effect in March, exchanges were given until Sept. 24 to find banks that would provide this service. Exchanges are abandoning lesser-known, underperforming coins to reduce risk and appeal to the banks and financial regulators as safe places to do business.