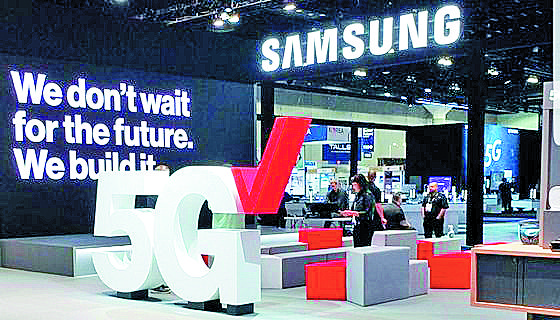 That market was dominated for years by China’s Huawei and European vendors like Nokia and Ericsson. Washington’s sanctions on Huawei forced many countries to diversify their network suppliers, and the Korean giant is moving in.

The tech company announced Tuesday it will provide Vodafone a set of advanced wireless access technologies needed for the deployment of 5G, including a virtualized radio access (vRAN) system. vRAN enables telecom companies to run networking functions as software in contrast to the widely-used, centralized radio access network that requires physical hardware upgrades.

“The latest deal is similar to the previous ones, because it focused on offering software-oriented vRAN system to realize open interfaces in radio access network,” said a spokesperson for Samsung Electronics.

The contract is considered a landmark for Samsung: the first time the company sells to a Europe-based company in the 5G network business sector.

The company declined to put a dollar figure on the deal, although market insiders speculate that it could surpass $1 billion.

That estimate is based on the dominant market share of Vodafone and the scale of its user base.

Founded in 1985, Vodafone is a leading multinational telecom company with over 300 million subscribers and a presence in over 60 countries through various partnerships.

“We are proud that this collaboration with Vodafone — one of the premier carriers in the world — will be the first scaled deployment of our pioneering 5G technologies in Europe, including vRAN and Open-radio access network(O-RAN),” said Cheun Kyung-whoon, President and Head of Networks Business at Samsung Electronics.

“Vodafone is committed to leading the next wave of digital transformation across Europe, ensuring fast and reliable connectivity for all,” said Johan Wibergh, Chief Technology Officer, Vodafone. “Open RAN, built on strong partnerships, is key to realizing this ambition.”

Japan made the same decision in 2018, which many believe translated into a boon for Samsung.
The company clinched a 5G network deal with Japanese telecom company KDDI last year and with NTT, the largest mobile provider in Japan, in March.

Ericsson came in second with a 29.2 percent share and Nokia third with 18.7 percent. Samsung controlled 7.2 percent, putting it in fifth place.