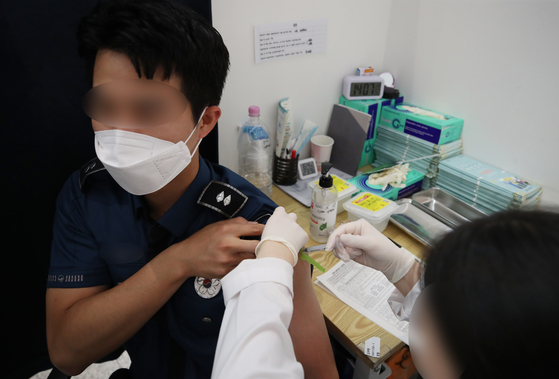 A police officer gets a Pfizer shot at a vaccination center in Yongsan District, central Seoul, on Tuesday, when inoculations began for essential personnel as well as daycare center, kindergarten, and first- and second-grade elementary school teachers under 30. [YONHAP]


Korea administered Covid-19 vaccines to 25 percent of its population as of Tuesday ― hitting the milestone about two weeks earlier than planned.

“The number of people who received one dose of a Covid-19 vaccine exceeded 13 million as of 2:30 p.m. today,” said Kim Ki-nam, an official from the Covid-19 Vaccination Task Force, during a briefing Tuesday.

“This means over 25 percent [of the total population], or one out of every four Koreans has received at least one shot,” Kim added.

The KDCA set a goal of inoculating 13 million people by the end of June. Recently authorities announced they expect up to 14 million can be inoculated in the first half of the year.

“We have the goal of having more than 36 million people at least partially vaccinated by the end of September,” Kim said, adding, “We will try to advance the goal of reaching herd immunity in November as much as possible.”

On Tuesday, Korea kicked off Covid-19 vaccinations for around 200,000 essential personnel such as police, coast guard officers and firefighters, as well as daycare center, kindergarten, and first- and second-grade elementary school teachers under 30.

They were previously set to get AstraZeneca vaccines, but that was changed due to concerns about rare blood clots in younger people below 30 years old. Instead they are getting Pfizer vaccines.

Health authorities are planning to administer the Moderna vaccine, the fourth vaccine approved in the country, in the next few days to medical personnel at upper-level general hospitals and medical students aged under 30.

The government will announce its vaccination plan for the third-quarter on Thursday.

In order to get more people vaccinated, the government has promised various incentives — like allowing bigger gatherings, walking outside mask-free, and most of all, to travel abroad.

These freedoms will apply to people who got their jabs 14 days before.

Currently, people who have gotten at least one dose of a Covid-19 vaccine are exempt from bans on private gatherings of immediate family members of more than eight people, and get discounts on fees at national landmarks or movie theaters.

Fully vaccinated people who have completed vaccinations in Korea are exempted from the mandatory 14-day quarantine after entering from abroad or coming in contact with a Covid-19 patient, and also allowed face-to-face visits at nursing homes.

More incentives are coming in July.

From next month, people who have gotten their first shot at least 14 days earlier will be able to take a walk on the street and exercise outside without wearing a mask.

For fully-vaccinated people, the country will waive a ban on private gatherings of more than four people in most regions, or more than eight in others.

In addition, fully-vaccinated people will be exempt from attendance limits based on social distancing regulations for both indoor and outdoor places. For example, under the current social distancing Level 2 in the greater Seoul area, a maximum of 100 people is allowed in public indoor facilities such as wedding halls.

Another big incentive is allowing fully-vaccinated people to visit countries where the Covid-19 outbreak has subsided, including Singapore, Taiwan and Guam, as early as next month.

So far, talks to arrange "travel bubbles" are underway with Singapore, Taiwan, Thailand and the U.S. Pacific territories of Guam and Saipan, places with “mutual confidence recognizing each other's stable coronavirus conditions.”

Only individuals on group tours who have been fully vaccinated will be allowed, however, as they are easier to monitor through travel agencies.

By the end of September, the government will further ease social distancing measures. It may lift indoor mask mandates after December. 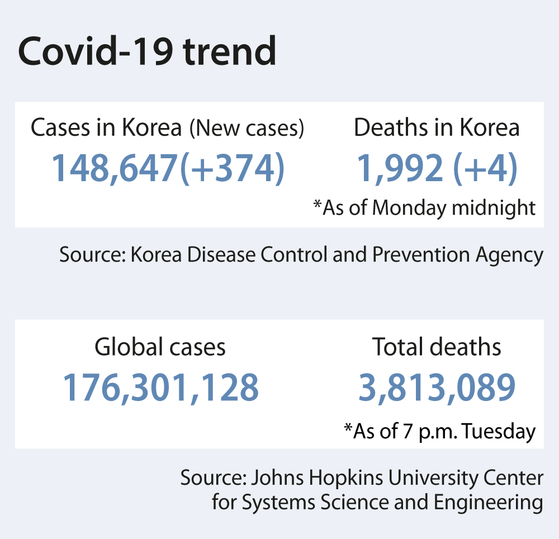