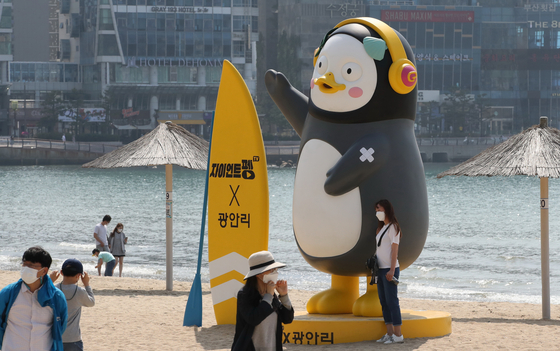 Visitors take photos with a statute of maskless Pengsoo, a popular penguin character created by the national education broadcasting channel EBS, at Gwangalli Beach in Busan on Tuesday. Last year, Pengsoo itself wore a mask to symbolize preventing the spread of Covid-19, but this year, Pengsoo took off its mask and now sports a bandage on its arm from being vaccinated, encouraging more people to take part in the vaccination campaign. [SONG BONG-GEUN]


The government called for strengthened preventive measures for Covid-19 during the summer holidays, advising companies to advance the beginning of the summer vacation period and stagger employees' days off.

The measures were announced at a special interagency meeting on the Covid-19 response chaired by President Moon Jae-in on Monday.

The Ministry of Health and Welfare advised the public to take two shorter holidays instead of one long one, and to minimize traveling in order to prevent the spread of the virus.

Tour groups must designate someone to manage overall Covid-19 safety measures, such as checking group members for symptoms and making sure they follow the preventive rules.

The government encouraged public companies and companies of more than 99 people to extend the beginning of their summer holiday period by two weeks, from the first week of July to the third week of June, and requested that the number of employees on leave at any given time be kept less than 14 percent of the total during the vacation period that goes until the third week of September.

The government will give incentives to private companies that stagger and split up their employees' holidays.

"Incentives will be provided such as rewarding additional points to workplaces that guarantee industrial accident prevention […] regardless of the size of the company," said Health and Welfare Minister Kwon Deok-cheol.

To prevent crowding at vacation spots, the government will create a system that categorizes the congestion of major tourist destinations and vacation spots into five levels based on big data, and promote less crowded tourist spots.

The congestion information can be found on the Ministry of Culture, Sports and Tourism's “Visit Korea” website (korean.visitkorea.or.kr) and the Ministry of Oceans and Fisheries' “SEA N TOUR” website (seantour.kr).

Enhanced social distancing rules will be applied to facilities, such as only allowing half of the total capacity in cable cars, limiting the number of people in changing rooms at water parks, and keeping a distance of 2 meters (6.6 feet) between parasols at beaches.

Bookings for accommodation will be limited to up to four people, or up to eight for immediate families.

Starting this month, however, people who have gotten at least one dose of a Covid-19 vaccine will be exempt from limits on immediate family gatherings, and fully-vaccinated people can ignore restrictions on private gatherings of more than four people from July. 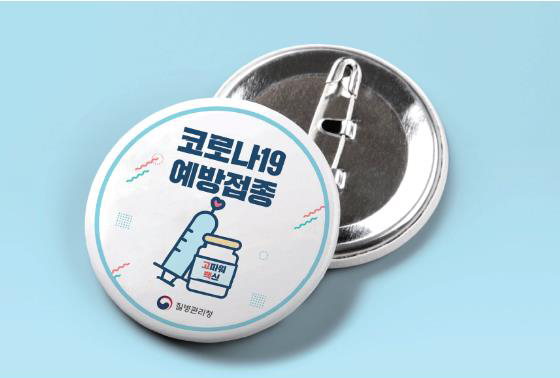 The design for badges which will be given to vaccinated people was revealed on Tuesday, but the government said they cannot be used as proof of vaccination. On the other hand, the government will give out stickers to vaccinated senior citizens, to be attached to their ID cards for proof of their vaccination, as they are not familiar using mobile app certificates. [YONHAP]


The government also plans to equip pharmacies around tourist attractions with home test kits and expand temporary screening centers to improve accessibility of getting tested. 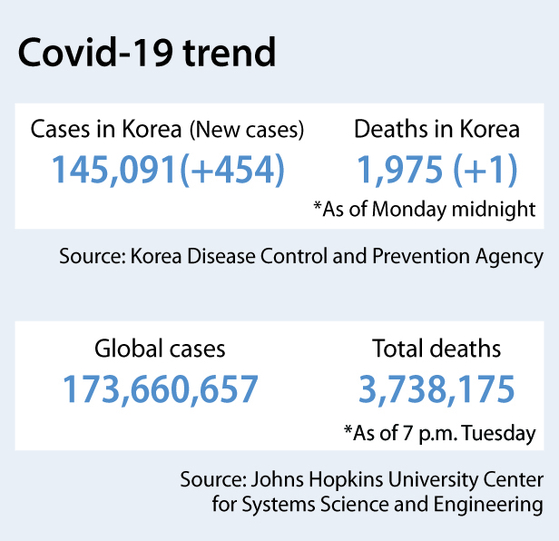 The country added one more virus death, raising the death toll to 1,975.

A cluster of infections tied to a Central Asian cuisine restaurant in Changnyeong County, South Gyeongsang, continued to grow.

According to local health authorities, a total of 59 people related to the group have tested positive as of Tuesday. Most of them are foreign farm workers from Russia and Central Asia, including Uzbekistan, Kazakhstan and Kyrgyzstan.

Health officials believed that infections were found mainly in foreigners as they were recently hired ahead of the garlic and onion harvesting season.

While deploying six translators, local officials urged all foreign workers and their employers, and people who visited the restaurant, Bulsok, to get tested for Covid-19.

“We are expanding Covid-19 tests as the [infected foreigners] had very close contacts. Many of them dined at the same restaurant and worked and lived together,” said Shin Jong-woo, head of health and welfare of South Gyeongsang.