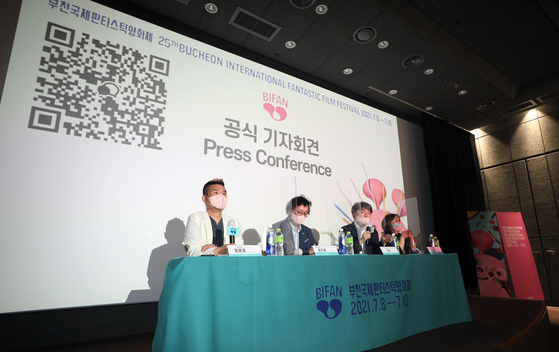 The organizing committee of the 25th Bucheon International Fantastic Film Festival held a press event on Tuesday at the Fantastic Cube theater in Bucheon City Hall. The festival will continue to be held in a hybrid format like last year due to the Covid-19 pandemic. [NEWS1]


The 25th Bucheon International Fantastic Film Festival (Bifan) has an appropriate slogan for the post-pandemic era: “Stay Strange.” Bifan is known for its concentration on horror, fantasy and science fiction, and small, independent films.

“Till We Meet Again” by Taiwanese director Giddens Ko was selected to open the festival. A total of 258 films from 47 countries were invited to screen from July 8 to 18. Offline screenings go through July 15, and online screenings will continue on streaming platform Wavve through July 18. A total of 146 films including 61 features and 85 short films will be screened online.

“We have formed our own protocols to prevent the spread of Covid-19 this year,” said festival general manager Eom Yong-hun at a press event Tuesday at the Fantastic Cube theater on the first floor of Bucheon City Hall in Gyeonggi.

Eom assured the press that, like last year, they will do their best for offline screenings and programs to be held safely.

Ten films are will compete for the Bucheon Choice award for international features, with the most anticipated being Thai horror film “The Medium,” produced by Na Hong-jin, director of “The Wailing” (2016), and directed by Banjong Pisanthanakun of “Shutter” (2004). It tells the tale of a possessed shaman’s family experiencing mysterious phenomena in the Isan region of Thailand. The film is having its world premiere at Bifan and will be released in Korean theaters later in the month.

“Our festival and Na go a way back — we are inseparable,” said Ellen Y.D. Kim, head programmer for the Asian cinema section of the festival. “The festival has been with Na from the very early days of his career when we screened his short films 'A Perfect Red Snapper Dish' (2005) and ‘Sweat’ (2007).”

The festival will also introduce over 80 types of XR (Extended Reality) and VR (Virtual Reality) content this year, which it has been doing since 2016. This part of the Bifan festival is called “Beyond Reality” and it is the only local film festival to feature such immersive content. The "Beyond Reality" section will start a week ahead of the festival's opening, from July 1, and the films will be shown at a different location: at Incheon International Airport.

“This year’s slogan is ‘Stay Strange,’” festival director Shin Chul said. “Right now, we live in an era where we should become strange, I believe. Bifan thinks of this strangeness as a signal for evolution and we will do our best to follow this fluctuating change.