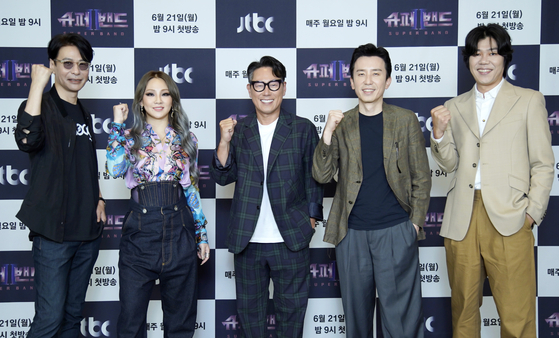 The show aired its first episode later that day.

Singer and producer Yoon Sang, Yoon Jong-shin, Yoo Hee-yeol, Lee Sang-soon and singer CL of now-disbanded 2NE1, shared what the program has in store this time around for the home audience. The first season was aired in 2019.

The show aims to find members to make a global band, discovering hidden musicians who work on their music at home and have not shared much with the public.

“If in other audition programs you mainly to see idol-like performances, ‘Super Band’ would be the only audition that takes a bigger range of music,” said Yoo during the press conference.

“Since this is the program where we can talk about musical stories and learn from those, I didn’t hesitate to participate.”

Yoo said, as he expected, there are so many jewels to be discovered.

“There are so many talented artists from whom we might want to ask for help immediately.”

Lee, also well-known as the husband of singer and entertainer Lee Hyo-ri, said this program is attractive for him personally as he also started doing music as a member of a band.

The only woman producer on the show, CL plans to give good advice to the contestants.

“I hope all the contestants really enjoy [what they do on the show],” said CL. “It is quite a rare opportunity to meet all these people of different backgrounds at once.”

Another producer, Yoon Sang, said this program has a lot of performers who decided to audition after watching the first season.

“Keep your eyes open for people who shine when working with other musicians,” said Yoon. “It will be fun to choose the one you want to cheer for, and see how high they climb up or who gets to team up with who else.”