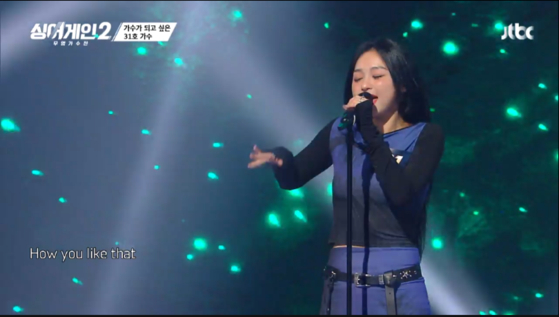 
A vocal trainer for major K-pop agencies, the lead singer of an indie band, singers behind well-known K-drama theme songs and winners of past audition shows... They’re all equal on JTBC’s audition program “Sing Again 2."

Names don’t matter on “Sing Again” — only talent, because every contestant, regardless of their past careers, is only identified by numbers.

"Sing Again 2" kicked off on Dec. 6 and so far its first two episodes have seen high ratings. Promptly after Monday’s second episode, it was also the most-searched program on streaming platform Tving.

The show is the second season of “Sing Again” (2020-21), which shot singers such as Lee Seung-yoon, Lee Mu-jin and Jeong Hong-il to fame. They had not seen much commercial success before appearing on the audition program.

The show’s secondary title is “Battle of Unknown Singers.” Contestants, who are required to be already-debuted singers who have officially released at least one song, compete on the show using numbers instead of their names to identify themselves, much like contestants on Netflix's “Squid Game.” However, rather than getting killed when they’re eliminated like in the hit series, contestants on “Sing Again” get to reveal their real names before stepping down from the stage. 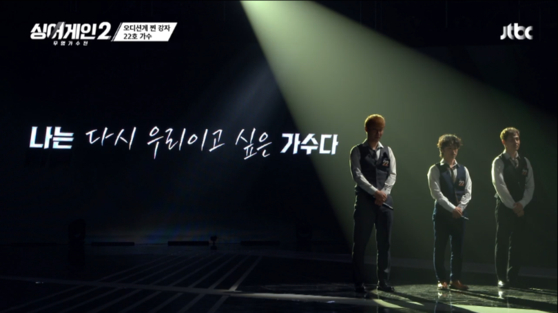 "Sing Again 2" requires contestants to be already-debuted singers who have released music. [JTBC]

“Viewers have grown invested in the concept of shedding light on individuals who are talented but have not been able to achieve publicity, thinking that giving them a stage to perform on is a good cause. Especially since the Covid-19 pandemic has put a strain on obscure and better-known singers alike, the public continues to empathize with them."

The first season saw a relatively small number of applicants for an audition show, most likely because being an already-debuted singer was a requirement. Many may have found the idea of appearing in a competition specifically for “unknown” singers somewhat embarrassing. However, after the success of season 1, season 2 saw a significant increase in applicants.

Many contestants are the singers behind songs — often one-hit-wonders — widely known among the public, although the singers themselves have not received much attention. 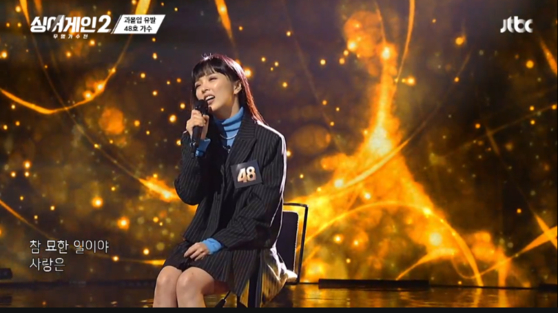 Many contestants on "Sing Again 2" have released one or two songs that are well-known to the public, but have received little attention themselves. One of them is singer 48 who sang “It’s Strange, With You," an original soundtrack for the 2014 series “Discovery of Love” (2014). [JTBC]


Singer 24 is behind the 2005 song “It’s Love" and singer 4 is known for her hit “Sweet Heart” (2015). Team 22 was the winning team of Mnet’s 2011 audition show “Superstar K3.” Their appearances on "Sing Again 2" became the talk of the town, since many people have heard their songs but didn’t know their faces. Meanwhile, singer 31 became known as a vocal trainer for major K-pop management agencies as well as Mnet’s hit idol audition show franchise “Produce" (2016-2019).

“After season 1 was a hit, many unknown yet talented singers and hidden master musicians were motivated to muster up the courage and apply,” said the producers of “Sing Again 2.”

“There are so many contestants who surprised us with their talents, and their genres became more diversified than season 1, encompassing jazz, rock and more.”

Contestants also belong to a wide age range from people in their 20s to their 50s and offer various genres of music including ballads, rock and jazz.

On the show, singers get approved for the next round based solely on talent, and even relatively better-known singers get eliminated.

Singer 48 who sang “It’s Strange, With You,” which was part of the original soundtrack for the 2014 series “Discovery of Love," passed the first round with a unanimous vote from the eight judges. One of the judges, singer-songwriter You Hee-yeol, sighed “She debuted 11 years ago, how did we not know about her [until now]?” 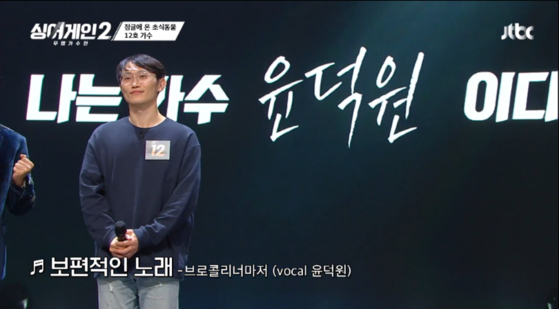 
Meanwhile, singer 12 who is lead vocalist Yoon Duk-won of indie band Broccoli You Too, which has achieved moderate commercial success, and singer 43 Kim Hyun-sung who released the 2002 hit “Heaven” did not make it to the next round. Their names were revealed upon their elimination.

“Sing Again 2” has a panel of eight judges. Six to eight votes from them mean “passed,” four to five means “shelved” and three or below means “eliminated.”

“We considered diversity among judges as well, so that we can evaluate contestants from the perspectives of various genres and generations,” said the show’s producer Chae Seong-wook. “The ‘shelved’ factor is a device to listen to a contestant one more time and see their full potential.”

“The ‘shelved’ aspect of the show, which has been there since the first season, gives the eliminated a second chance — which also fits with the overall purpose of 'Sing Again,'” critic Kim added.