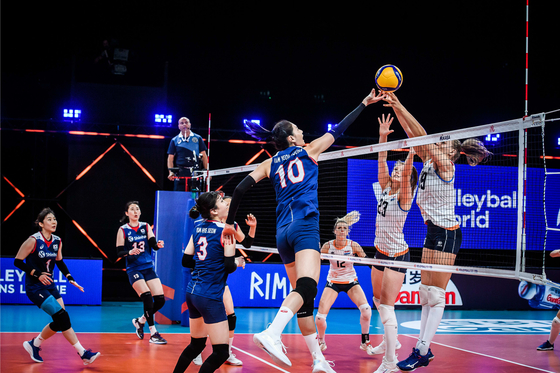 Kim Yeon-koung jousts for the ball at a Volleyball Nations League match against the Netherlands on Sunday in Rimini, Italy. [FIVB]


Korea rounded off a difficult Volleyball Nations League (VNL) with three straight losses over the weekend, dropping games to Brazil, Turkey and the Netherlands in Rimini, Italy.

Though Korea dropped the match against Brazil in straight sets on Friday, it wasn't a complete failure as Korea had more digs and receptions than the Brazilian side.

"We tried to do our best in defense," Yeum Hye-seon told Volleyball World after the match. "Since they are a good team, they were also digging well. But we also showed good volleyball."

Captain Kim Yeon-koung scored 17 points, the most of the match, but Brazil had the edge, taking its 11th victory at VNL against Korea.

Korea's defense was back in action against Turkey the next day, with 70 digs and 83 receptions as opposed to Turkey's 66 and 78.

Korea applied pressure by winning the third set and pushing the game to a fourth, although Turkey ultimately emerged victorious.

"At the beginning of the sets we couldn't serve properly, so we struggled with this element," Park Eun-jin told Volleyball World after the game.

"Later on we started to serve stronger and we could get a right position to defend and thus we managed to win one set."

But Ebrar Karakurt of the Turkish team was unstoppable, scoring a total of 22 points alone. Kim and Park Jeong-ah scored the most, 12 points each, for the Korean team.

With the win against Korea, Turkey earned a spot in the final four that advance to the semifinals. 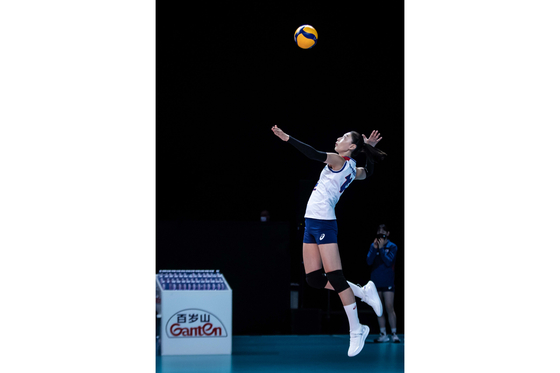 Kim Yeon-koung serves the ball at the Volleyball Nations League match against Turkey on Saturday in Rimini, Italy. [FIVB]


In the last match against the Netherlands on Sunday, Korea lost after a hard fought, five-set match that lasted two hours and 40 minutes.

After fourteen matches together at the VNL, Team Korea showed off some strong teamwork in their final outing of the tournament.

In the first set, Korea conceded four points to the Netherlands' feints, where a player fakes an attack to throw the blockers off and then lets the ball drop into an open spot.

That trick only worked for so long, and by the second set Korea seemed to have figured out a solid defense, digging feint attacks and converting them into attacking points.

Korea started out the second set up by five points, but after a time-out the Dutch side closed the gap to 24-23 to Korea. Lee Da-hyeon added one more to give Korea the second set home.

Both teams took one set each — the Dutch took the third and Korea the fourth — forcing the match into a fifth set with 15 points instead of 25 to win.

Korea opened the scoring for the last set, but after a quick back and forth the set was tied at 7-7.

But Korea was unable to outscore the Dutch side and the score went to a 14-11 match point for the Netherlands. Some confusion over a last-gasp VAR review worked out in the Netherlands' favor, and the set was won 15-12.

"Actually, we were prepared to win this game, but their receiving was better than expected and we couldn't block and defend well against their main attackers, so we didn't manage it," Kim said after the match.

Korea ends the tournament in 15th place with three wins and 12 losses. Only the top four countries go to the semifinals on Thursday.


Kim personally ends at 11th on the top scorer ranking and 9th on the best attacker ranking.

The team returns to Korea on Tuesday and will self-isolate for a week, then train in a bubble for a week.

At the Olympics next month, Korea will face Brazil, Kenya, the Dominican Republic, Japan and Serbia in Pool A. The top four teams from each pool will advance to the quarterfinals.