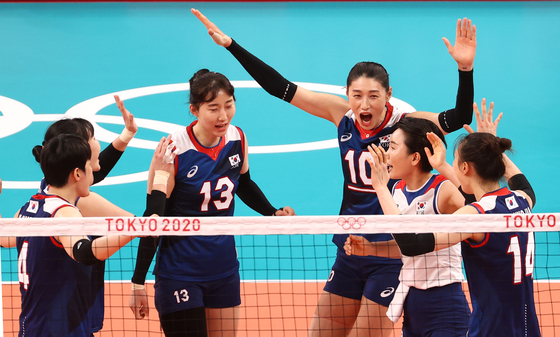 The Korean women's volleyball team celebrate after scoring a point against Kenya on Tuesday at Ariake Arena in Tokyo. [YONHAP]


The Korean women's volleyball team romped past Kenya in three straight sets in their second game of the Tokyo Olympics at the Ariake Arena in Tokyo on Tuesday.

Korea briefly trailed behind Kenya at the start of the first set, but quickly outscored them 25-14 in 24 minutes with three-time Olympian Kim Hee-jin showing off some pazazz, pulling out an ace for the first time at the Games to score Korea’s 19th point then adding two more.

Korea's win wasn't unexpected. Kenya is a lower-ranked team with less experience playing on the international stage. Kenya is ranked world No. 24 on the FIVB rankings, as opposed to Korea's No. 14.

For Korea, the match was not just a matter of winning against an outranked opponent, but picking up things to improve their game when they go against stronger teams.

One thing to watch out for was the Tokyo Games stricter standard for catch ball, a foul when the ball does not bounce off the hand right away.

Case in point, the referee declared what seemed like Park Jeong-ah’s block to actually be Kenya’s point because the ball had stayed too long in Park’s hand before she sent it across the net.

Toward the end of the second set, the point difference closed up to two points at 24-22, but a serve mistake from the African side handed the set to Korea.

Kenya opened the scoring in the third set, with Korea trailing behind until Kim Yeon-koung’s attack put the score back at 5-5.

The Kenyans tested the higher-ranked Korea with strong resistance, keeping the score close until Korea won the third set 26-24 after three deuces.

In the third set, video reviews prolonged the match, with the referee checking the wrong footage and was unclear about the review, causing unnecessary delays. 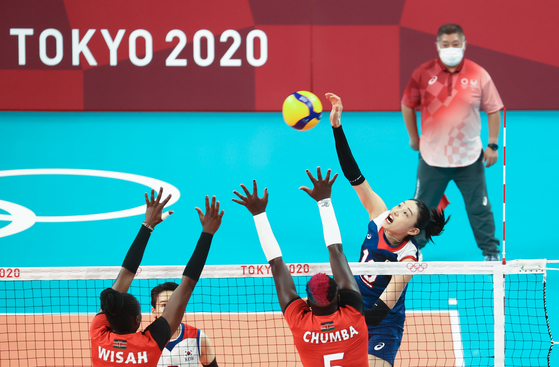 Kim Yeon-koung attempts an attack against Kenya at the women's volleyball match on Tuesday at Ariake Arena in Tokyo. [YONHAP]

Unable to figure out the reason for this decision, the referee forced the game to resume.

This confusion gave Kenya momentum, catching up to a 24-24 tie.

Compared to Korea’s first match against world No. 2 Brazil on Sunday, the team played better in every aspect, with eight aces compared to none on Sunday. Korea had three blocks against Brazil and 11 this time, with 38 digs as opposed to 20 on Sunday.

Despite the win, Korea’s predictable attacks allowed easy blocks from the Kenyan side, playing in a monotonous rhythm, with unstable receives and serve mistakes allowing the inexperienced team to take the lead quite a few times or trail behind closely.

Still, this win comes as a much needed victory after Korea lost its first game of the 2020 Tokyo Olympics to Brazil in three straight sets on Sunday evening. Korea will next face the Dominican Republic at 11:05 a.m. on Thursday.