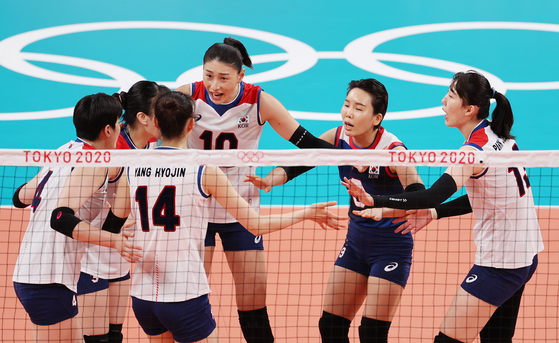 The Korean women's volleyball team celebrates after scoring against the Dominican Republic at the Ariake Arena in Tokyo on Thursday. [NEWS1]


The Korean women's volleyball team clinched a much needed win against the Dominican Republic at the Ariake Arena in Tokyo on Thursday after a hard-fought five sets that lasted two hours and 12 minutes.

This is Korea's second win after losing to Brazil on Sunday but defeating Kenya in straight sets on Tuesday.

After taking one set each, Korea put up a fight against the Caribbean side in the third set, managing to grab on to a one-point lead that widened toward the end with Kim Yeon-koung's smash finishing the set with Korea up 25-18.

In the fourth set, Dominican veteran libero Brenda Castillo, who was named the tournament's Best Libero at the 2012 London Olympics, was as sharp as ever. Whenever Castillo set the ball, the team capitalized with powerful hits and Korea gave up the set 25-15 in just 26 minutes, pushing the match to a fifth set. 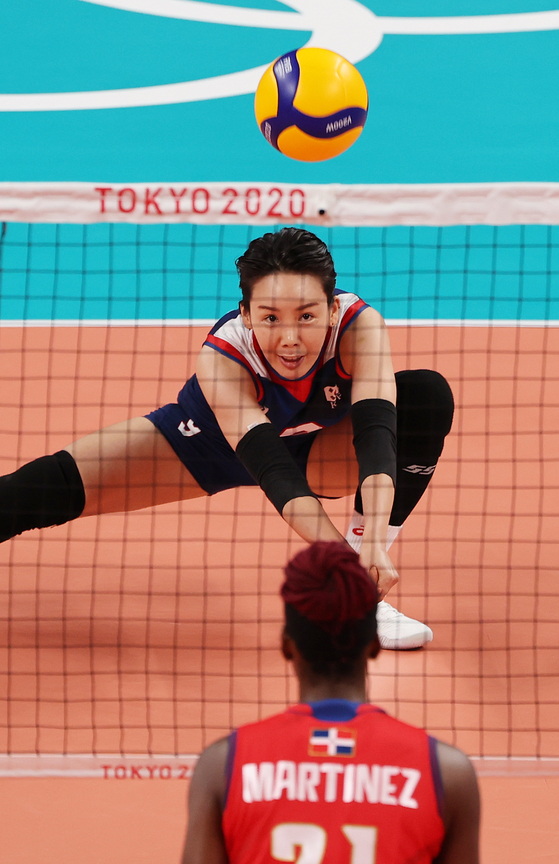 Libero Oh Ji-young of the Korean women's volleyball team sets the ball against the Dominican Republic at the Ariake Arena in Tokyo on Thursday. [NEWS1]


Korea had a lot to prove, having lost in three straight sets against the Dominican Republic this June at the 2021 Women's Volleyball Nations League in Rimini, Italy, where Korea finished second to last whereas the Caribbean side finished sixth.

Korea made the most of that experience in the fifth set. After an intense contest, the match went to a 9-9 tie but with two straight points from Kim Yeon-koung, Korea started to pull ahead. Kim Hee-jin slammed in another and with just one point left to a win, Park Jeong-ah spiked one down the line, tying up the match nicely.

This comes as a much-needed victory for Korea to advance to the knockout stage as only the top four teams in Pool A get to advance.

Korea will next face Japan at 7:40 p.m. on Saturday and go on to face Serbia at 9 a.m. on Monday as their last match of the preliminary rounds.