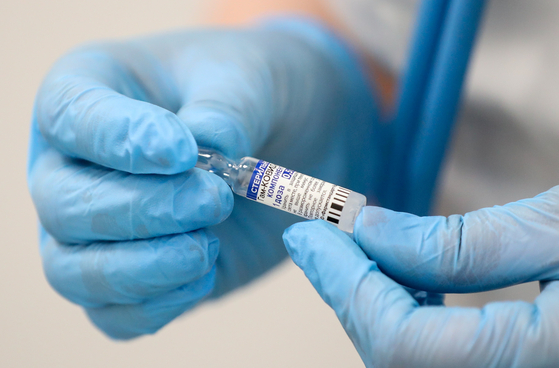 A healthcare worker prepares a dose of Sputnik V vaccine at a vaccination centre for the Yandex Go drivers and couriers in Moscow, Russia June 24, 2021. [REUTERS/YONHAP]

This is one of the two Korea-based consortiums that won the right to mass produce Sputnik V last year. Both Sputnik V and Light were developed by the Gamaleya Research Institute of Epidemiology and Microbiology with RDIF funding. The consortium's second deal to produce Sputnik Light was pushed by RDIF's request, Huons said Monday.

Both are viral vector vaccines that inject a weaker version of the virus to create antibodies, the same mechanism used by the AstraZeneca and Janssen's Covid-19 vaccines.

Compared to Sputnik V, which has to be administered twice, Sputnik Light was developed as a one-shot version targeting countries with high infection rates.

Sputnik Light has been approved for distribution in Russia, Kyrgyzstan, Venezuela and Mongolia so far. Phase 3 clinical trials for the vaccine were launched February in Russia, the United Arab Emirates and Ghana, to be tested on more than 7,000 participants.

Sputnik Light has efficacy of 79.4 percent for a single dose, the RDIF claims.

The Huons Global-led consortium includes subsidiary Humedix, Prestige Biopharma and Boran Pharma. According to Huons Global, Sputnik's developers are due to visit Korea next month to transfer the technology for the two Russian vaccines.

Sputnik V is currently approved for distribution in 67 countries and is waiting for approval from the World Health Organization and the European Medicines Agency. With the transferred technology, the consortium plans to start running factories to test the quality of the Sputnik vaccines produced in August. After the validation process, mass production will likely start in September or October, Huons said.

Huons Global hires outsider to be its first president