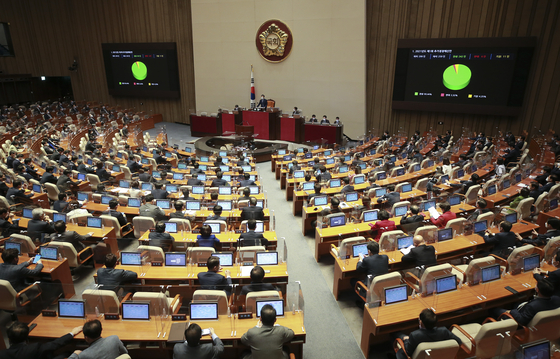 
Mr. Choi, a 51 year-old operator of a restaurant in Seoul's southern Gangnam district, was happy with the news of yet another government supplementary budget -- which contains relief measures for small businessmen like himself.

“It’s a relief,” said Choi, whose restaurant has been badly affected by the social distancing measures implemented since late November.

“I wasn’t eligible for the last emergency relief grants as my business grossed more than 400 million won ($352,000) the previous year.”

Choi said he isn’t fully satisfied with the amount he was receiving, but it was better than nothing.

The fourth round of emergency relief grants go to neighborhood stores and restaurants with annual revenues below 1 billion won. The grants were raised from a maximum 3 million won per businesses in previous rounds to 5 million won.

The vote came 21 days after the government turned over the budget bill to the assembly.

It passed with landslide support: 242 in favor, six opposed and 11 members abstaining.

It was the first supplementary budget for this year and the fifth since the Covid-19 pandemic started.

Under the approved budget, 56 percent was taken up by 8.4 trillion won in funding of the emergency relief grants for small businesses and for some other groups like low-income households.


However, lawmakers agreed to cut the budget for interest payments on government treasuries by 200 billion won, bringing the supplementary budget to 14.9 trillion won.

One of the biggest change from the original government proposal for the budget was a boosting of the emergency relief grants for small businesses.

The ruling Democratic Party and opposition People Power Party agreed on the need to give more help to businesses struggling with the social distancing measures.

The budget for supporting small businesses was raised from the 6.9 trillion won proposed by the government to 7.3 trillion won.

Reductions were made to some proposals by the government, including for government job programs that were deemed less urgent, such as sorting products for recycling.

“While there was an adjustment, [the extra budget] was confirmed around 15 trillion won as proposed by the government,” said Finance Minister Hong Nam-ki via Facebook on Thursday. “Hopes of returning to normality and an economic recovery are growing.”

The goal is to send out the checks before the mayoral by-elections in Seoul and Busan on April 7.