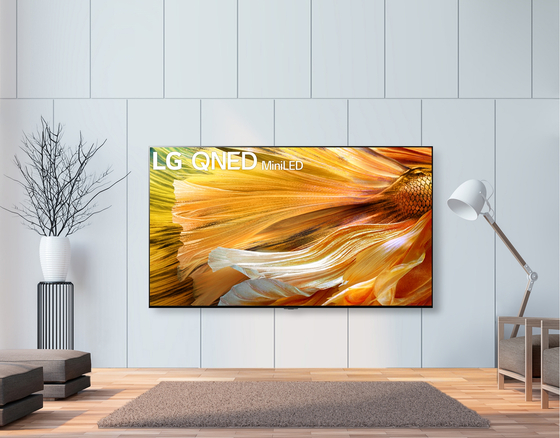 
LG Electronics will roll out its newest television models this week in the North American market. They use microscopic light emitting diodes (LEDs), or Mini LEDs, as backlights.

Dubbed QNED, they are high-end LCD televisions and make use of Mini LEDs for backlighting to improve on the old-style LCD displays by using much smaller LEDs at a higher density compared to conventional LCD TVs.

After introduction in North America, the QNED line will become available in Japan, Europe and Korea, according to the TV manufacturer on Wednesday.

When the company initially announced its plan to release the QNED last year, it said that the prices will be about half the price of its organic light emitting diode (OLED) models.

But given that LG’s 65-inch OLED TVs start from 3.8 million won, the pricing of QNED could be a letdown for some consumers who expect more budget-friendly prices.

The higher prices are attributed to the pandemic-induced demand for TVs and computer monitors and the subsequent shortage of LCD panels.

The QNED models will be in a direct competition with the Samsung Electronics Neo QLED built upon the same Mini LED technology. China's TCL has released a set of Mini LED TVs below the 2 million won level.

LG Electronics claimed that its products are capable of producing better color contrast as it came up with a filter layer that merges two techniques, called Nanocell and Quantum Dot.