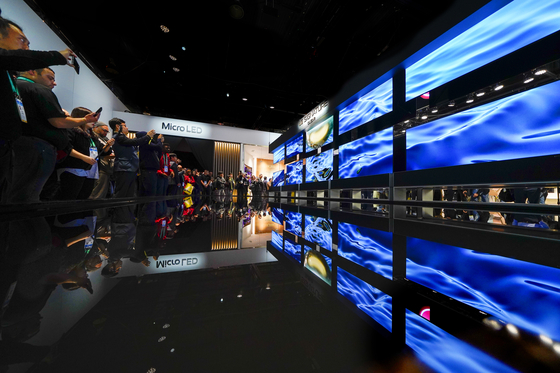 Q. TV makers are always releasing new models — why do we care so much this time?

A. The basic technology underpinning TV design is always evolving, and in the last few years there have been a number of big innovations that have changed things rapidly, churning out industry weird acronyms like QLED, OLED and QNED and confusing concepts like Micro LED and Mini LED.

The world’s two largest TV makers are Samsung Electronics and LG Electronics, and both companies are constantly pushing to prove their technical supremacy in the face of stiff competition from price-cutting Chinese competitors such as TCL and Hisense.

LG’s big bet for years has been on its more advanced organic light-emitting diode (OLED) TVs to target people willing to spend a bit more on a premium product, while Samsung has recently introduced its Micro LED TVs as a premium alternative.

At the same time, Samsung Display is scheduled to mass-produce its own large-size OLED screens in the second half of this year, opening the possibility that Samsung Electronics might turn those screens into TVs in the future.

But premium TVs only appeal to a small audience, and its lower down the price table that things have recently started to get interesting, as both Samsung and LG have recently announced new ways to improve quality of the backbone of every regular TV, the liquid-crystal display (LCD).


Q. What do all these acronyms actually mean?

A. The series of seemingly impenetrable acronyms often leaves shoppers perplexed, especially because some are real technologies and some are brand names made up by TV makers.

To better clarify, let’s see how these different types of TV actually fit together.

LCD is a good starting point because it is the most commonly used panel type that accounts for around 98 percent of all television sales. An important characteristic of LCD TVs is the need for a backlight behind the LCD sheet to render it viewable because liquid crystals are not illuminated.

Samsung Electronics’ QLED TVs are a type of LCD display, using a quantum dot-based color filter on top of an LCD panel. The light-emitting diodes (LEDs) mentioned in the names are not used for pixels — as in some premium TVs — but are used as the backlight.

Using LEDs as a backlight is also the concept behind Mini LED TVs, which use microscopic LEDs to provide more precise backlighting, producing better contrast and color. This is considered the top tier of LCD TVs.

LG’s QNED, Samsung’s Neo QLED — two of the newest TV lines announced in recent weeks — and TCL’s 6 and 8 Series, are all based on the Mini LED technique, so they are all technically LCD TVs.

OLED is a very different concept, as a film of organic compound emits light directly without the need for a backlight.

The absence of a backlight delivers a whole range of advantages including improved contrast, rich color range and low energy consumption compared to any other LCD-based TVs.

Still, OLED TVs tend to be susceptible to color degradation and screen burn-in, especially when exposed to sunlight over a long period of time.

LG Display is the pioneer in this technology, supplying its panels to LG Electronics OLED TV sets and other manufacturers including Sony, Xiaomi and Vizio. 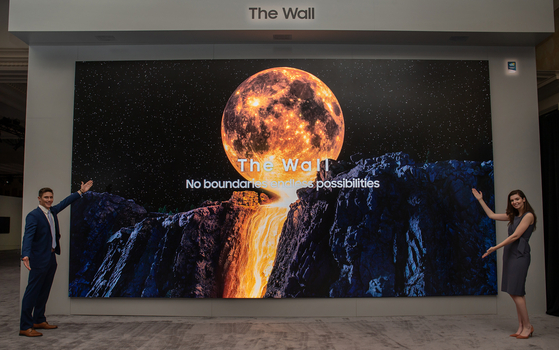 Models pose with Samsung Electronics’ first Micro LED TV The Wall, which was unveiled in 2020.

Micro LED TVs use an array of microscopic LEDs to form the individual pixel elements, applying the same underlying principle as industrial signage.

A backlight is not needed since the microscopic LEDs can directly emit light, essentially playing the same role as the organic compound in an OLED TV. But since they are inorganic, they are less vulnerable to the image-burn issue.

Samsung Electronics’ Micro LED TV is based on this technology, but its 110-inch set comes with a hefty price tag of over 100 million won ($91,200). 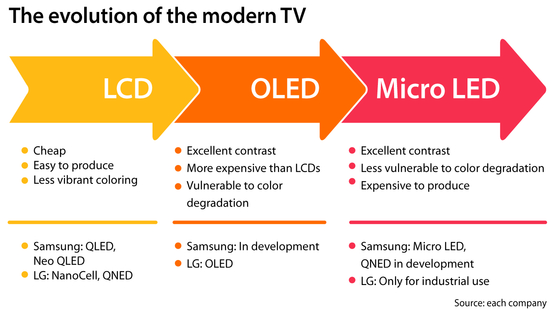 Q. What's next for this technology?

A. Samsung Display, a display panel maker 85 percent owned by Samsung Electronics, is developing its own OLED panels and another next generation display using nano-sized LEDs.

The panel maker announced in 2019 that it will invest a total of 13.1 trillion won into the new technologies through 2025.

Choi Joo-sun, CEO of the panel supplier, announced earlier this month that it will enter mass-production of OLED screens within this year.

But that doesn't mean Samsung Electronics will produce OLED TVs, although that is a possible option.

To carve out its own niche, Samsung Display plans to apply its quantum dot-based color filter to its OLED panels to enhance brightness.

A. Some industry insiders see the upcoming display as a game changer because it doesn't need a backlight but is easier to assemble than Micro LED displays.

The display consists of blue light-emitting LEDs called Nanorod, so Samsung Display calls them QNED — not to be confused with LG’s LCD TVs of the exact same name.

Samsung's nano QNED TV panels use LEDs that are even smaller than those used in Micro LED TVs, but because of the way they are printed onto panels, they are more efficient to produce. While a Micro LED TV has to be constructed from a number of different modules, a QNED nano LED TV can be printed as one whole panel, potentially making them more efficient and less risky to produce.

The display maker has reached the final stage of development for QNED and the main issue to be resolved is linked with yield rate in the process of production, according to Yi Choong-hoon, head of market tracker UBI Research.

A. If we limit the answer to those currently on sale, OLED and Micro LED TV models easily surpass all LCD models in terms of picture quality, thanks to their self-illuminating light sources.

For those concerned that OLED might not have a long enough lifespan, Samsung’s Micro LED might be the answer. But it comes at an extremely high price. They're also not readily available yet, even for customers with the money to spare.

For many consumers, LCD TVs will serve just fine, and higher-end versions like QLED and Mini LEDs offer a little more quality without the premium price tag.

A. That shift will take place, but gradually. LCD televisions still take up a great portion in sales for both Samsung Electronics and LG Electronics, especially for Samsung, since it doesn’t have OLED TV models.

And thanks to a wide range of color enhancement technologies, LCD TVs are still well-received in the mass market. This is one reason why both manufacturers are pushing their Mini LED LCD televisions at CES 2021 with a plan to release them in the coming months.

Having produced OLED TVs for years already, LG is likely to continue to push and develop the technology, but that doesn't mean it is leaving LCD TVs behind any time soon.

Still, it is more cautious with the expensive Micro LED TVs, currently only offering the displays for business-related signage.