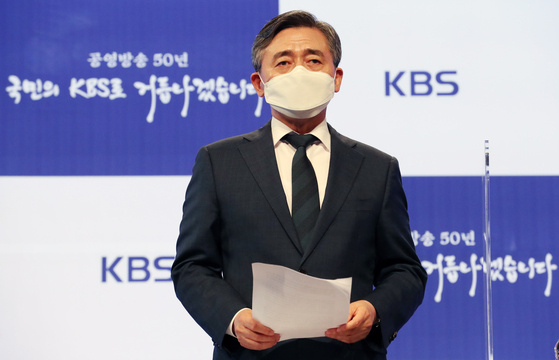 President Yang Seung-dong of KBS speaks during a press conference held at the KBS Annex in Yeouido, western Seoul, on Thursday. [NEWSIS]


KBS is well aware of the criticism it faces but promises to do better with increased TV license fees.

The Korean Broadcasting System, better known as KBS, announced that its board of directors passed the proposal to raise TV license fees from 2,500 won ($2.21) to 3,800 won a month on Wednesday, during a press conference held at the KBS Annex in Yeouido, western Seoul, on Thursday.

If approved by the National Assembly, it will be the first increase since 1981. Since 1994, the Korea Electric Power Corporation (Kepco) has been adding TV license fees to electricity bills in which more than 50 kilowatt hour (kWh) of power is used.

“We are not asking to raise the fees simply because it has stayed the same for 41 years,” said Kim Sang-keun, chairman of KBS’s board of directors, at Thursday's conference. “We are asking because it is inevitable. We cannot fulfill our responsibilities as a public broadcasting station in our current financial situation.” 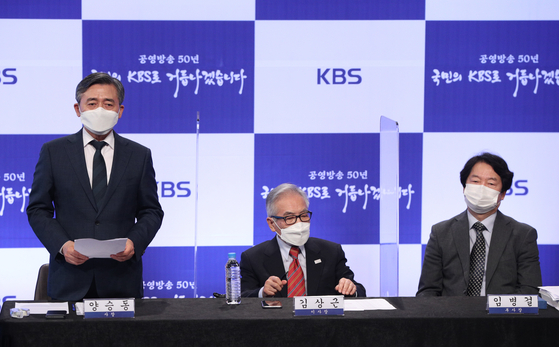 
Many have criticized KBS for overpaying its employees who were not putting in effort to make interesting programs, and that KBS was increasing advertisements yet still wanted more revenue via TV license fees.

According to a KBS survey, 91.9 percent of people believed that public broadcasting stations are necessary, but only 42.6 percent said KBS has been fulfilling that role. Nonetheless, 79.9 percent of them agreed that a rise in TV license fees was necessary. After months of public opinion polling and internal discussions, the board eventually passed the proposal on Wednesday.

“We are aware of the people’s criticism: incompetent management, being a mouthpiece of the government and arrogance,” Kim said.

“Even the board of directors were skeptical when we submitted the proposal, because the public’s perspective of KBS is already very negative due to our incompetent management and broadcasting mistakes every now and then,” said Yang. “But the board made a tough decision for the future of KBS.”

After offering a mea culpa, the officials defended the decision. 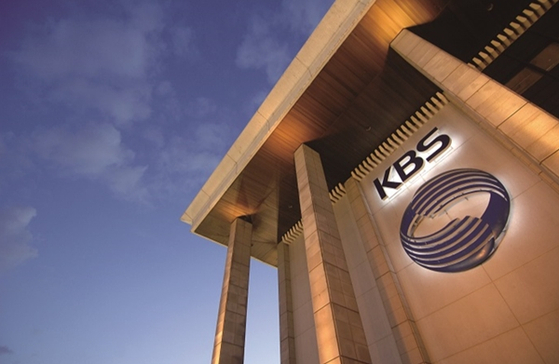 
“KBS’s main source of revenue is intended to be TV license fees,” said Yang. “Britain’s BBC and Japan’s NHK respectively get 70 percent and 90 percent of their revenue via license fees. That number is currently only 47.3 percent for KBS, and will be 58 percent once the proposal is authorized by the National Assembly.”

Officials promised the public that KBS will put the increased TV license fees to good use. Some of the improvement plans presented by Lim were strengthened 24-hour disaster coverage, return of epic historical dramas and TV concerts that everyone can enjoy.

It announced austerity measures, such as cutting 1,400 jobs over five years and hiring about 500 new employees. One-third of the newly-hired employees will be assigned to the digital content section.

“Yesterday’s passing of the proposal was not portrayed in a positive light in the media. So we are expecting that it will be very difficult to get public approval, and also to get passed in the National Assembly. We are not optimistic about raising TV license fees either,” said Kim.

A date with an ex