Back to masking in Seoul as Covid cases spike

Back to masking in Seoul as Covid cases spike 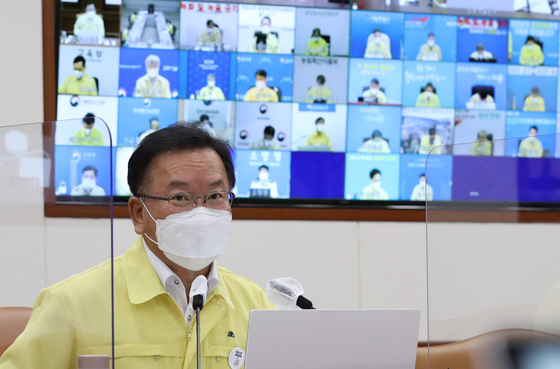 Prime Minister Kim Boo-kyum presides over a Covid-19 meeting of the Central Disaster and Safety Countermeasures Headquarters in Seoul on Sunday. [NEWS1]


Facemasks will remain mandatory in the greater Seoul area — even for vaccinated people — due to a recent surge in virus cases.

In addition, drinking will be banned outdoors after 10 p.m. in parks and riversides in Seoul, Incheon and Gyeonggi.

A planned relaxation of measures has been called off as health authorities deal with a spike in new Covid cases.

More than 80 percent of new cases have been registered in greater Seoul, and the proportion of patients in their 20s and 30s — who are not yet eligible for vaccinations — is on the rise.

A fine of up to 3 million won ($2,640) will be imposed on operators of facilities or venues who allow people to go maskless. Fines of up to 100,000 won ($88) can be levied on the individual violators.


That was the highest number of virus cases reported on a Sunday this year. Sunday figures are usually lower due to fewer tests conducted over the weekend.

Infections coming in from overseas reached the second-largest tally on Sunday, sparking fears of an inflow of the more contagious Delta variant.

There were 81 imported cases, up 35 from the previous day.

Cases from Indonesia accounted for the most, 39 cases, followed by 21 from Uzbekistan, 11 from Russia and four from the Philippines.

The weekly average of imported cases rose to 48 from June 28 to July 4, up from 42 a week earlier and from 29 two weeks ago.

The cases from Indonesia were particularly alarming because the Delta variant is prevalent there.

Health authorities added India and Indonesia to a list of countries for which quarantines will be mandatory, even if the travelers are fully vaccinated.

Moreover, all passengers coming from India must quarantine at a state-run facility for seven days, unlike other arrivals. After testing negative for the virus at the end of a week, they will be required to self-isolate at home for a second week.

Like other parts of the world, Korea is raising its guard against the spread of the highly transmissible Delta variant.

A total of 263 people had been infected with the Delta variant as of last Monday. The number is updated once a week. Adding the people who have an epidemiological relationship with those variant patients, however, the number would increase to 359.

In addition, the Delta variant was found in nine people so far from a recent cluster of infections tied to foreign teachers at English-language hagwon (cram schools) in several schools in Gyeonggi cities.

The infections spread to students and their families, many kindergartners or younger elementary school students, as well as patrons of nearby restaurants and bars in Mapo District, western Seoul.

The number of coronavirus patients related to this cluster reached more than 300 as of Sunday, adding fears that more Delta patients could be found.

Around 29.9 percent of Korea's population had received one dose of a Covid-19 vaccine as of Saturday midnight, while 10.4 percent had been fully vaccinated.


Starting Monday, Pfizer jabs will be offered to around 197,000 people aged 60 to 74 whose vaccine appointments were delayed due to supply shortages in June, as well as around 110,000 essential workers under 30 who were excluded from the AstraZeneca inoculation age limit. Vaccinations will go from July 5 to 17.

Recently AstraZeneca doses fell short as delivery of 835,000 AstraZeneca doses by the Covax facility, or the World Health Organization (WHO)'s vaccine-sharing mechanism, was pushed back from late June to July. 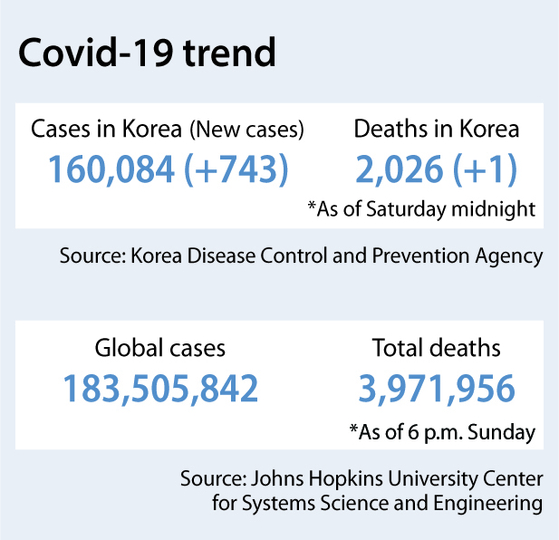 Mixing and matching of vaccines — meaning those who got a first dose of AstraZeneca may get Pfizer as their second dose — will begin Monday.

This comes after the KDCA raised the recommended age for AstraZeneca vaccines from 30 to 50, after rare blood clots with low platelets were discovered in two men in their 30s after receiving AstraZeneca shots.

Everyone under 50 who received first dose AstraZeneca vaccines will get Pfizer shots for their second dose.

The groups getting mix-and-match vaccines in July include employees of military and correctional facilities, at-home caregivers aged over 30, medical workers at clinics and pharmacies, essential workers and younger citizens waiting for their second shot.

Inoculations of the Pfizer vaccine, which have only been administered at designated vaccination centers, will be widened to some 2,000 medical institutions nationwide from July. In addition, guidelines were eased to open a new vaccine vial for just one person.

As a result, supplies of leftover vaccines for last-minute, online reservations are likely to increase soon, including Pfizer vaccines. Until now, the service — also known as NoShow Vaccines — only offered left-over AstraZeneca vaccines.