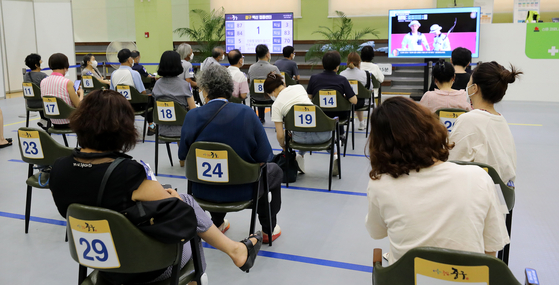 People between the ages of 55 an 59 wait for possible adverse reactions after receiving Pfizer shots at a Covid-19 vaccination center in Jung District, central Seoul on Monday. [NEWS1]


The Delta variant could account for more than half of new Covid-19 infections this week in Korea, health authorities warned Monday.

“The Delta variant is rapidly increasing, and seeing this week’s situation, it is possible to predict objectively that the detection rate will exceed 50 percent this week,” Sohn Young-rae, a senior epidemiological strategist at the government’s Central Disaster Management Headquarters, told reporters Monday.

It is the Delta variant that has created Korea's fourth wave of infections. Korea had nearly 600 to 700 daily new infections for several months, which has spiked to over 1,000 in recent weeks.

According to data from the Korea Disease Control and Prevention Agency (KDCA), the proportion of the Delta variant in local Covid-19 infections in the previous week — from July 18 to 24 — surged to 48 percent. It was only 2.5 percent in the third week of June.

Earlier this month, authorities predicted the Delta variant could become the dominant strain “sometime in August.” That prediction changed to “within weeks” in last week’s briefing. Now it's upon us.

The current spread of the virus is “considerably rapid” compared to the second and third waves of pandemic, so the government is implementing tougher social distancing measures across the nation: Level 4 in the greater Seoul area and Level 3 in other regions.

The Delta variant, which first came to prominence in India, is known to spread about 1.6 times faster than the Alpha variant, which was first identified in Britain, according to the KDCA.

The risk of hospitalization could be 2.26 times higher, it says.

Specific figures for the four major variant strains of the virus detected in Korea over the past one week — Alpha, Beta, Gamma and Delta — will be revealed on Tuesday. 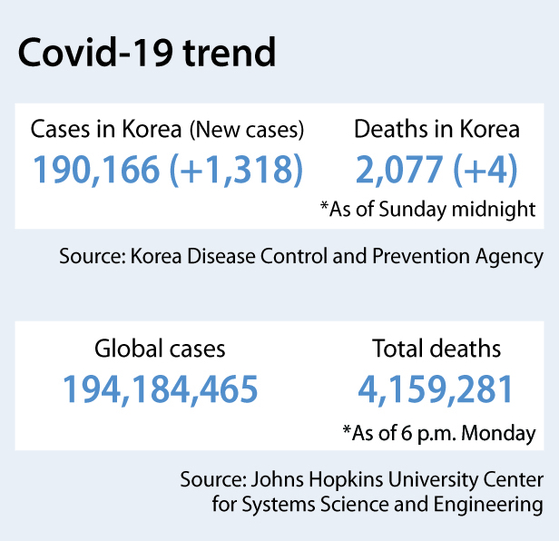 Korea added 1,318 new coronavirus cases on Monday, the highest Monday figure ever, bringing the total caseload to 190,166, according to the KDCA.

Four more people died from Covid-19, bringing the total number of fatalities to 2,077.

Among the new cases, 1,264 were locally transmitted — with 749 coming from the greater Seoul area and 515 from outside regions.

The rise of infections in non-capital areas has been a major concern, and on Monday they jumped to 40.7 percent of total cases, the highest since the beginning of the fourth wave in July.

With regions outside the capital region becoming the new epicenters of virus cases, they will all be put under Level 3 — the second-highest of the four-tier distancing system — starting Tuesday until Aug. 8.

Under Level 3 rules, gatherings of more than four people are banned, and only 49 people are allowed at events.

Indoor sports stadiums and religious facilities can only be filled to 20 percent of their capacity.

Some cities and counties where new infections are skyrocketing, including Daejeon, Gimhae, Yangyang, are scrambling to prevent the spread of coronavirus by raising social distancing to the highest Level 4.

The government is also underscoring the need for vaccinations.

People in the Seoul metropolitan area will get Pfizer shots, while others will receive Moderna's.

In addition, people who will get the shots from Aug. 2 through 8 will receive Pfizer's.

While mix-and-match vaccination — meaning different vaccines for the first and second doses — has been underway, there was good news on the practice. One domestic study released Monday claimed that virus neutralizing antibodies were six times higher in people who got a first dose of AstraZeneca and a second dose of Pfizer compared to people who got two AstraZeneca shots.

However, mix-and-match vaccination was less effective against the fast-spreading Delta variant, the report by the KDCA’s National Institute of Infectious Diseases (NIID) said.

The NIID observed 499 people and examined the antibody titer, or level, and the neutralizing capacity against virus variants.

The government had been discussing the effects of mix-and-match vaccinations based on overseas research. This was the first study conducted of vaccinated people in Korea.

The neutralizing capacity against Beta, Gamma and Delta variants was 2.5 to 5 times lower — both when mixing-and-matching vaccines and vaccinated with the same vaccine — while it didn't decrease against the Alpha variant.

In Korea, about 690,000 people have received mix-and-match vaccinations with first doses of AstraZeneca vaccines and second doses of Pfizer, and around 1.61 million are expected to complete vaccination with different doses by Sep. 7.