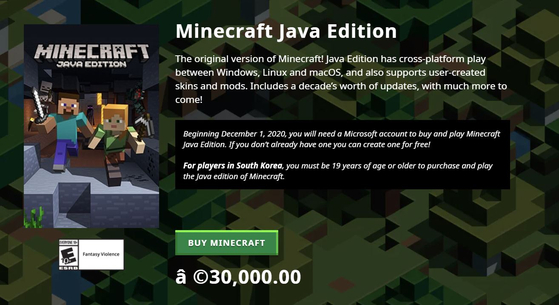 Minecraft's official home page states that users of the game's computer Java Edition in Korea must be 19 years of age or older. [SCREEN CAPTURE]


The Ministry of Gender, Equality and Family has agreed to review the controversial “shutdown law" that bans minors from playing PC games after 12 a.m.

Effective since November 2011, the law bans teens younger than 16 from playing computer games between 12 a.m. and 6 a.m. The aim was to forcibly prevent teenagers from late-night gaming — an activity seen by the ministry as causing sleep deprivation, health damage and potentially, game addiction.

Since it took effect, the law has been attacked by players, game companies and even lawmakers that questioned its effectiveness, especially after smartphones replaced desktops as the dominant medium for games. Facing those criticism, the Ministry of Gender, Equality and Family has always refused to abolish the law.

Its Tuesday statement, however, strikes a softer tone, suggesting the ministry is now willing to consider a change.

“The gaming environment has shifted and multiple bills were proposed to the National Assembly in regard to this law, including abolition,” the statement said.

“As such, the ministry plans to fully cooperate so that various parties can voice their opinions in finding a balance with the initiative of protecting teenagers.”

It added that a seminar will be held in late July to foster discussion between stakeholders, experts and other ministry officials to examine whether the regulation is excessive from international standards.

The ministry’s sudden announcement appears to be a reaction to an ongoing controversy surrounding Microsoft’s popular video game Minecraft.

Released in 2011, the game allows players to build structures on an open terrain and interact with other users. It is deemed one of the most successful video games of all time. Popular among children, the game has been acknowledged for its educational effect and has been used in classrooms as a learning tool as well.

The recent controversy regarding the game was sparked by a joint statement from online communities of Minecraft gamers attacking the shutdown law.

Last year, Minecraft announced that from Dec. 1, only people aged 19 or over will be able to download and play the PC version of the game. That means the game, which in Korea has an official age rating at 12 and up, was made unavailable on computers for the country’s teenagers, or the younger children that for years have been the target audience.

For Microsoft, the policy change was a technical matter. The IT company had purchased Minecraft’s developer, Mojang Studios, in 2014 and was in the process of integrating Minecraft user accounts into its system.

But Korea’s unique shutdown law meant the company would have to establish a separate server that shuts down a specific group of users between 12 p.m. and 6 a.m. every day. Rather than go through that process, Microsoft simply decided to ban younger players from the platform.

The restriction does not ban minors playing the game via mobile or console.

“As creators in architecture, design, programming and entertainment, minor gamers are the driving force of the Minecraft community,” the statement from the online communities said on Friday.

“The shutdown law breaches the right of minor gamers, restricts the local [game] industry and isolates Korea from all other markets.”

In its initial response on Friday, the Ministry of Gender, Equality and Family blamed Minecraft, saying it was the company’s decision to block Korean teenagers, not the shutdown law.

“Korea is the only country in the world now where Minecraft is practically an R-rating game,” wrote Kim Seo-joon, CEO of Hashed, an accelerator specializing in blockchain technology, in a Facebook post. “In all languages, the Minecraft website specifically states that Korean users have to be 19 years and older — it’s embarrassing.”

Multiple bills are currently pending for review at the National Assembly, seeking for amendments.

“The job of the National Assembly and the government is to find a solution, not add regulations and tighten rules,” said People Power Party lawmaker Her Eun-a, which submitted a bill supporting the law’s abolition, Tuesday.

“Unlike teenagers developing skills dancing and singing to be the next BTS, minors with a talent in games, dreaming of becoming the next Faker, are labeled addicts. There’s a discrimination issue here [...] and considering the various viewpoints, we need efforts to raise the status of games and e-sports in this country as the next growth engine.”

In a statement on Tuesday, Microsoft said it is looking for a solution to the issue and plans to release a follow-up measure in the second half.