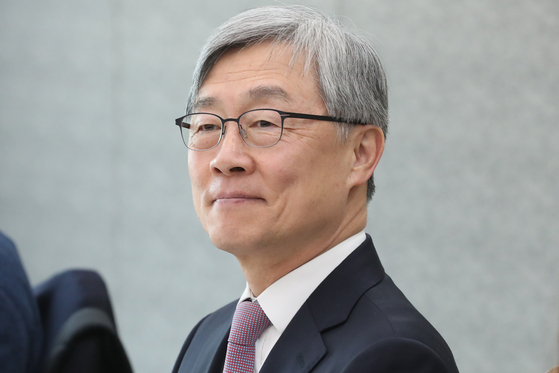 
Choe Jae-hyeong said Wednesday he's going into politics, nine days after resigning as head of the Board of Audit and Inspection (BAI).

But he didn't confirm a presidential bid.

In a phone interview with the Hankook Ilbo, Choe said he has decided to start a political career.

“As I said when I stepped down from the BAI, I have thought about how I can contribute to this country and society,” he said. “I have reached the conclusion that I should participate in politics.”

It was the first time Choe spoke about a future in politics since stepping down from the BAI on June 28. At that time, he said it was inappropriate for him to continue leading the BAI amid growing speculation about him running for president.

President Moon Jae-in handpicked Choe, a 64-year-old former judge, to head the audit agency, known for its political independence and neutrality, in January 2018. He had six months left in his four-year tenure when he quit.

Over the past months, Choe emerged as a possible presidential contender for the conservative opposition. Ever since the BAI announced last year that the Moon administration shut down the Wolsong-1 nuclear reactor earlier than scheduled based on a faulty economic assessment report, the ruling Democratic Party (DP) attacked Choe and the BAI for trying to undermine the legitimacy of Moon's nuclear phase-out policy.

Immediately after accepting his resignation, Moon complained that Choe had set “an undesirable precedent” by leaving the BAI to start a political career.

Choe is the second top official from the Moon administration to resign for a possible presidential run for the opposition. Yoon Seok-youl stepped down as prosecutor general in March.

While Choe has yet to say that he will run in the March 2022 presidential election, some supporters have formed a group called “People Who Embrace the Star,” and urged him to run. They held a rally on Monday.

Choe told the Hankook Ilbo that he needs more time to plan his immediate future. “What can I possibly say since I have just made my decision,” Choe said. “It will take some time to decide on the specifics and schedule official events.”

After stepping down from the BAI, Choe has cut off media contacts and gone to Gangwon Province with his family. He, however, returned to Seoul on Tuesday as his father, a 93-year-old retired Navy captain, is in critical condition in a hospital in Seoul.
Choe is expected to meet soon with Rep. Kwon Young-se, a senior leader of the People Power Party (PPP).

Under the new leadership of Chairman Lee Jun-seok, Kwon has been in charge of recruiting presidential contenders from outside the party. The four-term lawmaker is supporting Lee’s idea to persuade all opposition presidential candidates to run in the PPP’s presidential primary.