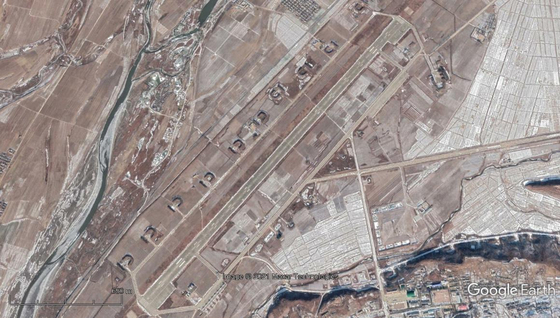 Satellite footage of Uiju Airport near the Sino-North Korean border, where delays in construction of planned sanitization and quarantine facilities reportedly resulted in the dismissal of Ri Pyong-chol from the North's Politburo Presidium. [GOOGLE EARTH]

The dismissal was noted by the official Korea Central News Agency (KCNA), which described the shake-up as a change “to the party's strategic initiative, which was caught up in conservatism and passivism” but did not give a specific reason for the dismissal.

Last Thursday, state media published photographs of the North Korean leader at Kumsusan Palace of the Sun, the mausoleum of his grandfather and North Korea’s founder Kim Il Sung, on his annual visit to pay homage on the anniversary of the elder Kim’s death.

Ri’s demotion appeared confirmed by his appearance in the photos in a black Mao suit –- not his customary military uniform -– and his place in the third row, far back from his customary spot next to the North Korean leader.

According to investigative reporting by the JoongAng Ilbo, the dismissal of Ri was triggered by delays to construction work at Uiju Airport, which North Korea is building to facilitate trade and economic aid from China in the wake of the border shutdown between the two countries.

A South Korean government official who spoke on the condition of anonymity explained, “North Korea, which closed its borders completely at the end of January last year, plans to equip the airport with quarantine and sanitization facilities in order to receive Chinese aid.”

Satellite imagery from March 17 showed the construction of new buildings next to the runway at Uiju Airport and the demolition of a aircraft storage facility used by the North Korean air force.

When Kim recently visited the airport, he was furious to discover that the project had fallen behind schedule, according to the official.

Speculation about Ri’s dismissal arose after Kim held an extended Politburo meeting on June 29 and berated officials in charge of implementing anti-epidemic measures for “neglecting their duties” and “creating a great crisis in efforts to ensure the security of the state and safety of the people.”

At the meeting, high-ranking party officials were dismissed and their replacements elected, including a member of the Presidium of the Politburo, but state media did not provide names.

The Politburo Presidium, which consists of Kim and four other members, is one of the most powerful political bodies in North Korea.

Footage aired by the North’s state television channel showed Ri with his head down and not participating in a vote at the Politburo meeting, heightening speculation that he had been stripped of his position.