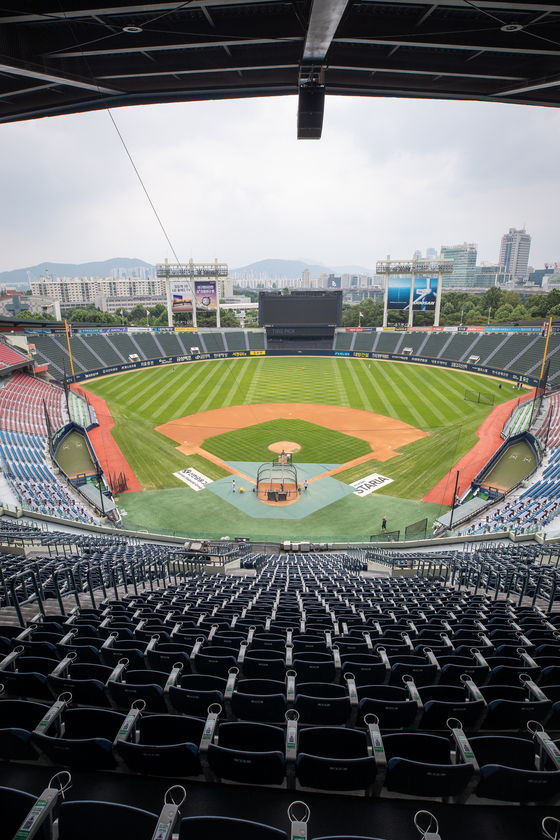 Jamsil Baseball Stadium in southern Seoul stands empty on Tuesday after all baseball games were canceled for the week due to an outbreak of Covid-19. [NEWS1]


The KBO's decision to postpone the last week of games before the Olympic break due to a Covid-19 outbreak will allow the Korean baseball team to begin training earlier than originally planned ahead of the 2020 Tokyo Games.

The KBO on Tuesday has postponed all 30 games scheduled from July 13 to July 18 after holding an emergency board meeting with all 10 club CEOs on Monday, effectively suspending the league until Aug. 9.

The KBO was originally meant to continue playing until July 18, when it would have stopped for the Olympics anyway. Under that plan, the national baseball team would have then gathered in Seoul to begin training together from July 20.

Instead, the national team will now begin training for the Games at Gocheok Sky Dome in western Seoul on July 17.

After a few days training, the national team is still scheduled to play two exhibition games next week.

The team will first play an exhibition game against a squad made up of the KBO’s best young players on July 23.

The decision to play against players under the age of 24 is a nod to Korea’s victory at the 2008 Beijing Olympics. Younger players are often known as Beijing Kids, referring to a generation of players who are presumed to have taken up the sport after watching Korea’s success at the Games.

After that, the team is scheduled to play another tune-up fixture against the Kiwoom Heroes on July 25 before flying to Japan on July 26.

With a number of national team players out of action for the last week due to canceled games following the Covid-19 outbreak, the early training and two tune-up fixtures will be an important chance to get back up to speed.

The Korean team, who enter the Games as the current defending champions, only have two weeks left before their first game of the Olympics, against Israel on July 29 at Yokohama Stadium in Yokohama, Japan.