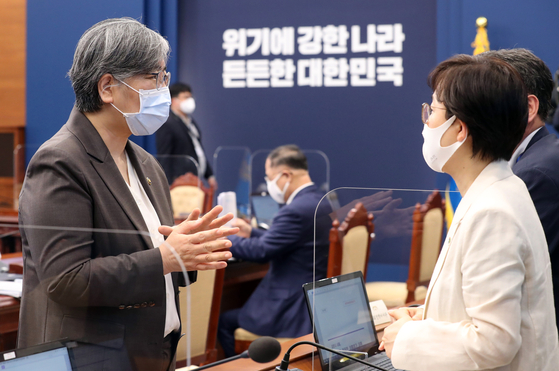 Jung Eun-kyeong, left, head of the Korea Disease Control and Prevention Agency, speaks with Ki Mo-ran, presidential secretary for disease control and prevention affairs, during a Covid-19 response meeting at the Blue House in Seoul on June 7. [YONHAP]


Opposition lawmakers are playing the blame game for the fourth wave of coronavirus infections, calling on the Blue House disease control czar to take responsibility.

On April 16, President Moon Jae-in named Ki Mo-ran, a professor of preventive medicine at the National Cancer Center, to a newly created post of presidential secretary for disease control and prevention affairs.

Ki's appointment was controversial from the beginning, especially due to some of her past remarks. In November, she told a radio program that Korea didn't need to rush to source vaccines.

There was also worries from the start that her role could overlap with existing positions overseeing disease control and prevention.

"People's livelihoods are on the verge of collective collapse due to the clumsy political quarantine measures," said Rep. Kim Gi-hyeon, floor leader of the main opposition People Power Party (PPP), in a party meeting Thursday. "What's even more surprising is that no one is responsible."

Kim singled out Ki and Lee Jin-seok, presidential secretary for state affairs monitoring, saying, "If these two people are not responsible for the failure in quarantine measures, President Moon Jae-in, who is in charge of national affairs, should be held accountable."

Kim was critical of Ki's appointment in his party's Supreme Council meeting Tuesday, criticizing her past remarks on vaccine procurement. He said her appointment came despite the "opposition of experts."

Korea saw a record high of 1,615 cases Wednesday and 1,600 again Thursday as a fourth wave of infections sweeps the country. Moon's government had been attempting to relax social distancing measures before it had to impose Monday the toughest Level 4 measures in the greater Seoul area.

Before her appointment as a presidential secretary, Ki served as a member of the government's Covid-19 Advisory Panel and participated in drafting the new four-level social distancing program.

The KDCA's commissioner Jung Eun-kyeong has been recognized for her tireless dedication to communicating with the public since the beginning of the coronavirus pandemic last year.

There have been reports that Ki ignored Jung's push to strengthen, not relax social distancing levels, though they were denied by government officials and the KDCA.

The Blue House denied Wednesday that the new presidential secretary for disease control and prevention affairs is supposed to play the role of a "control tower" — a common Korean description of a person or organization in charge of a situation — and said she performs a "bridging role" with other agencies working on the Covid-19 situation.

Park Soo-hyun, the Blue House senior secretary for public communication, told CBS Radio Wednesday that Ki "is faithfully playing the role of accurately understanding the situation by bridging the Blue House with government agencies" and that "her role is not to control such agencies."

He had been asked to respond to criticism that Ki has not been reflecting the advice of field experts and the KDCA.

Park added, "The Blue House has never changed its principle of prioritizing the opinions of all experts."

In the past, the president has stressed that the Blue House is the "control tower" in disasters. The new presidential secretary position had been considered as being in charge and accountable for the overall disease control measures.

Soon after Moon's inauguration in July 2017, a central region was hit by heavy rains and designated a special disaster area, "In the case of a major disaster, the Blue House is the control tower," Moon said.

At the time, Moon created a National Crisis Management Center to respond to disasters, separate from first and second deputy chiefs of the Blue House National Security Office. The move was a response to the tragic Sewol ferry sinking in April 1, 2014, which killed 299 people, mostly students, in which the Blue House under the Park Geun-hye administration evaded responsibility.

Rep. Youn Kun-young of the ruling Democratic Party (DP) said in a radio interview Thursday that attempts to hold Ki responsible for the Covid-19 situation were "pathetic."

He added, "If there is a fire, you should focus on putting out the fire. It is foolish to be debating what caused the fire."

Moon on Monday apologized for asking the public put up with the strictest level of social distancing restrictions.

He said in an interagency meeting attended by Blue House aides, leaders of local governments, "I am very sorry to ask the people once again to endure the situation a bit longer."

Moon called this the "biggest crisis" since the outbreak of Covid-19 last year and said the government will take measures to "establish a tighter web of virus control and prevention," including more testing, infection tracing and stronger measures to minimize long-term damage.