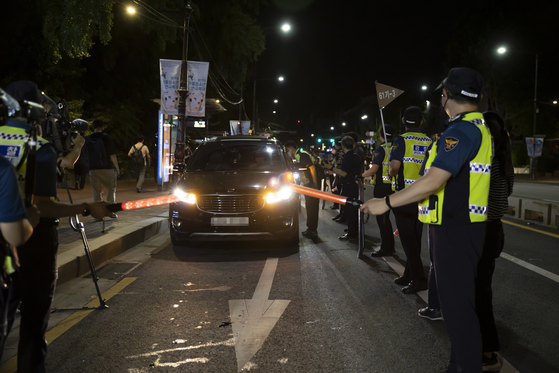 Police stop a car on a road near Marronier Park in central Seoul Wednesday night ahead of a planned drive-through rally by small business owners. [YONHAP]

The National Emergency Committee for Small Business Owners, formed by 22 associations of businesses like restaurants and internet cafes, mobilized near the Yeouido Park in western Seoul at 11:30 p.m. for a press conference — after getting off work at 10 p.m.

Under the government's social distancing rules, many small businesses have been subject to 10 p.m. curfews or shut down for months.

Forced Covid tests are another point of protest.

On July 7, the Seoul Metropolitan Government ordered all owners and workers of hagwon (cram schools), restaurants, cafes, noraebang (singing rooms) and PC bang (internet cafes) to take preemptive Covid-19 tests to find hidden infections, and warned that a fine of up to 2 million won ($1,752) could be imposed for violators.

Gyeonggi also advised all hagwon workers to take Covid-19 PCR tests every two weeks. In response, local governments in the province, including the cities of Goyang, Bucheon, Seongnam, Uijeongbu and Suwon, issued administrative orders saying violators will be fined up to 2 million won or have businesses shut down for two weeks.

In protest of that announcement, the Private Education Association of Korea filed a petition with the National Human Rights Commission saying such “unfair” administrative orders are “seriously violating the freedom of individual decision-making and the freedom of the body,” and held a one-man relay protest in front of the National Assembly building since Wednesday.

Under current Level 4 distancing applied in the greater Seoul area, all protests and rallies are prohibited — except for one-man rallies.

Wednesday night’s rolling rally, organized by owners of various small businesses, was chaotic, with a sudden change in venue and a delay due to police controls.

“Even if we’re vaccinated, Covid-19 infections will continue,” Kim Ki-hong, the National Emergency Committee leader, said at a press conference before the rally. “Until how long does the government believe that businesses should be closed for the pandemic to end?

“Merchants went out of business and are saddled with debt, but the government has yet to discuss how to compensate [them for losses]," Kim said.

Rep. Choi Seung-jae, a former president of the Korea Federation of Micro Enterprises and current member of the People’s Power Party (PPP), who also participated in the press conference, said, “As a lawmaker, I apologize to the merchants protesting on the streets, who should normally be at work.

After the 20-minute press conference, the cars driven by demonstrators headed to Daehangno. 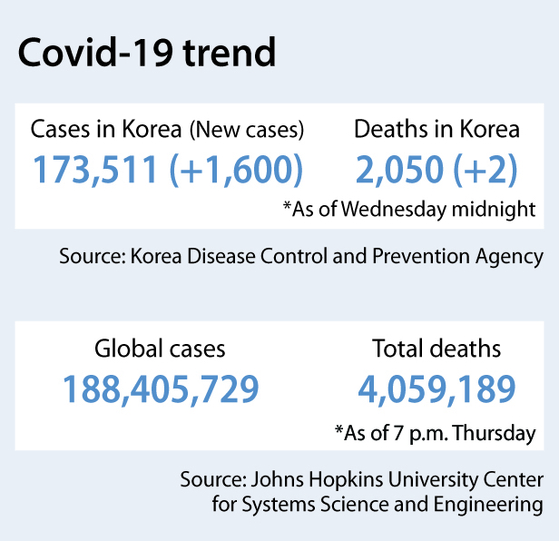 Around 750 cars driven by small business owners, according to the committee, drove around with flashing hazard lights as a sign of protest. Roads near Marronier Park in Daehangno soon became congested.

But in the evening, police set up more than 20 checkpoints near Sogang Bridge, Yeouido, and Gwanghwamun area to turn back the cars. Scuffles broke out between police and demonstrators when the police tried checking drivers' destinations.

“Small business owners have done nothing wrong,” one demonstrator shouted. “Why are they persecuting us like this?”

The Seoul Metropolitan Police Agency warned that it would take strict measures against the rally, which it called illegal.

“We will take legal action against all those involved in the rally for violating the Infectious Diseases Control and Prevention Act as well as the assembly law," said the agency, "and will take strict action against illegal activities such as using violence against the police force.”

The committee, however, claimed the police had no reason to report the rally, which it called a one-man drive-thru rally.

“We drove our cars and expressed our opinion individually, and it wasn’t a group action,” an official said.

The National Emergency Committee announced another rolling rally for midnight on Thursday, but didn't disclose the location.

There were two more virus deaths, raising the death toll to 2,050.