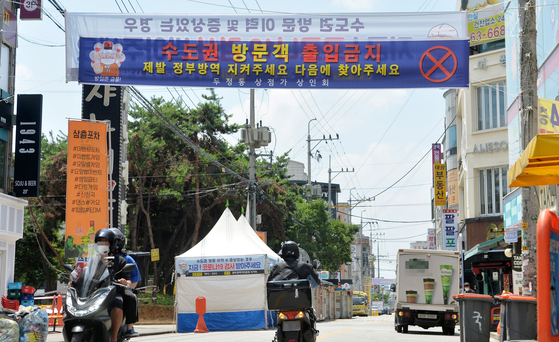 A banner at a food market in Dujeong-dong in Cheonan, South Chungcheong, prohibits the entry of visitors from the Seoul metropolitan area Friday amid concerns over a spike of Covid-19 cases nationwide. It urges people from Seoul to abide by the government's social distancing measures and come back another time. Social distancing measures are more lax in regions outside of the capital area, leading some people living in Seoul to visit in order to avoid restrictions. [KIM SEONG-TAE]


Korea and Israel struck the world's first vaccine swap deal on July 7, and President Moon Jae-in and Israeli Prime Minister Naftali Bennett agreed Friday it could serve as a "model of international cooperation" amid the global inoculation effort.

Moon in his first phone call with Bennett, who was sworn in as prime minister last month, discussed cooperation in the Covid-19 response, including exchanges of vaccines between the two countries, said the Blue House.

Israel last week delivered 700,000 Pfizer doses, which require ultra-cold chain storage and were set to expire at the end of the month, to Korea as the country faces its fourth wave of the coronavirus pandemic

Moon said Korea has started inoculating people with the vaccines received from Israel, which he said will be "a catalyst for further strengthening the friendship and trust between the two countries."

He added that in a situation where vaccine supply differs from country to country, Korea and Israel's case can serve as a "model of international cooperation."

The vaccines were allocated to people with jobs that involve a lot of interpersonal contact in Seoul and Gyeonggi as the Korean government aims to accelerate its vaccination program to counter the spike in Covid-19 cases.

Bennett in turn called Korea an "exemplary case in managing the coronavirus crisis from the beginning," crediting Moon's leadership. He said that he would like to learn more about Korea's quarantine efforts from a Korean epidemiologist.

The two leaders then agreed to share each other's experiences to better respond to the Covid-19 pandemic.

Under the vaccine swap, Korea will return the same number of Pfizer doses to Israel as soon as September.

Israel has fully vaccinated some 5.3 million people and has a total population of 9.3 million. 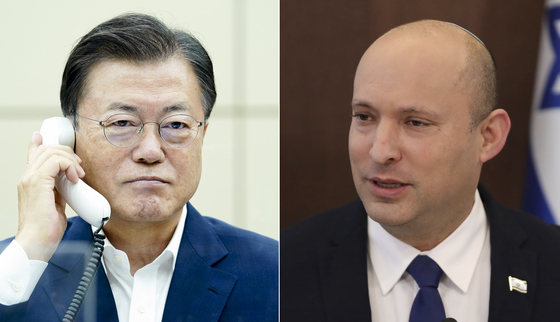 The cases were down somewhat from the 1,600s over the past two days. However, this marked the 10th consecutive day that daily cases remained in the 1,000s amid concerns over the rapid spread of the more contagious Delta variant.

The country reported one more fatality, bringing the total death toll to 2,051.

There were 60 imported cases, of which 26 were from Indonesia.

Korea has a list of 22 countries that are not allowed to be exempted from a 14-day quarantine after arrival in the country, which now includes the United Arab Emirates.

Kim addressed concerns over the spread of the virus across the nation and confusion over different gathering limits in different regions.

Under Level 4 measures currently implemented in the greater Seoul area, gatherings of more than two people are banned after 6 p.m. in the capital area, while nightclubs and bars have been forced to close.

Most regions outside the Seoul metropolitan area are under Level 2 measures, which ban gatherings of more than eight people, though some local governments have implemented stronger measures.

There have been concerns that people are heading to regions outside of Seoul where social distancing measures are more lax.

Health authorities have been worried about the spread of the virus nationwide especially taking into account that more people may travel as summer break and vacation season is around the corner.

The government could announce a nationwide ban on gatherings of over four as early as Sunday.

Of the newly confirmed domestic cases, 564 were from Seoul, 448 Gyeonggi and 95 from Incheon.

Amid concerns of the spike in cases in Seoul, there were 79,791 people tested on Thursday, exceeding the previous high of 78,217 on Monday.

As of Friday, 52 infections were related to a sauna in Gwanak District in southern Seoul.

A cluster of infections linked with the Hyundai Department Store in Samseong-dong, Gangnam District, in southern Seoul has led to at least 147 cases as of Friday, with over 22,000 people tested.

The Seoul Metropolitan government issued an administrative order to inspect 32 department stores, and 128,000 employees will be tested from Saturday to August 21.

The government said it will introduce QR code entry log systems on a trial basis at department stores, seen as high-risk facilities.

Seoul Mayor Oh Se-hoon in a press briefing Friday apologized for remarks made by Deputy Mayor Kim Do-sik Wednesday blaming the fourth wave on the president.

Oh added, addressing the spike in cases in the capital, "As the person in charge of managing quarantine measures responsible for the livelihood of citizens, I sincerely apologize."

Infections also are spreading in regions outside of the Seoul metropolitan area, with 49 cases reported in Busan, 49 in Daejeon, 32 in Daegu, 79 in South Gyeongsang, 38 in South Chungcheong and nine on Jeju.

The proportion of newly confirmed cases outside the Seoul area surged to 29.4 percent Thursday from 22.1 percent a week ago.

Health authorities warned that the Delta variant could become the predominant strain of the coronavirus in the country soon, which could lead to more serious cases of infections and more deaths.

However, Gimpo Airport Friday was bustling with people who say they made travel plans well ahead of the tightened social distancing measures.

The Jeju provincial government announced Friday it will raise social distancing measures from the current Level 2 to Level 3 next week, banning more than four people from gathering and shutting restaurants and cafés after 10 p.m.

President Moon in a social media post Friday wrote, "I am very grateful and apologetic to the people who have been cooperating and silently following the government's measures to strengthen quarantine in spite of the great inconvenience and difficulties."

He added that the situation may be "frustrating and difficult" but asked public cooperation in refraining from traveling and gatherings to stop the spread of the fourth wave of Covid-19 and also thanked front-line workers.