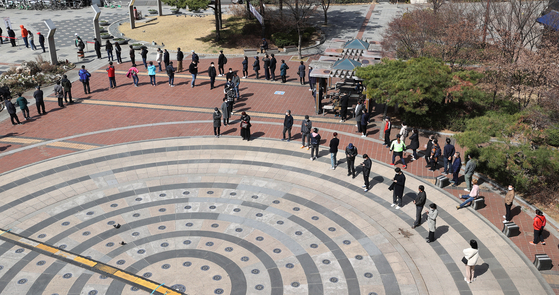 People are lined up at a Covid-19 testing site in Guro District, western Seoul, Tuesday following an administrative order by the Seoul city government for all foreign workers to get tested by the end of the month. [YONHAP]


All foreign workers in Seoul and Gyeonggi will be required to get coronavirus tests, said health authorities Tuesday, to combat the high number of Covid-19 cases in the metropolitan area.

The Central Disaster and Safety Countermeasure Headquarters said that it will work with Seoul and Gyeonggi, where a majority of Covid-19 cases are concentrated, and enforce measures to prevent the spread of the virus among foreign workers.

Illegal immigrants were also encouraged to get the free tests, and officials assured that their identities will not be disclosed. The Justice Ministry has temporarily suspended its crackdown on illegal sojourners.

The Gyeonggi government also issued an order requiring negative polymerase chain reaction (PCR) tests from all foreign workers before being hired, from March 22 to April 30.

Those who violate the administrative order can be punished up to 3 million won ($2,700) and will be requested to reimburse the government for the costs of testing, contact tracing and treatments. Employers found to have been violating social distancing regulations will be held responsible, said authorities.

Yoon Tae-ho, a senior Health Ministry official, said the PCR test requirements for hiring foreign workers “is not a discriminatory measure, but a means to enable foreign workers to work in safer environments at businesses or companies, catering to characteristics of regions with a high foreign population.”

The Seoul city government also said it will inspect some 30 sites including parks, department stores and supermarkets in the city to see if they are abiding by regulations from Wednesday to the end of March.

The government has Level 2 social distancing measures, the third highest in the country's five-tier system, implemented in the greater Seoul area and Level 1.5 in other regions through at least March 28.

Foreigners residing in Korea for over three months will be eligible for the free inoculation under the country's vaccination program. 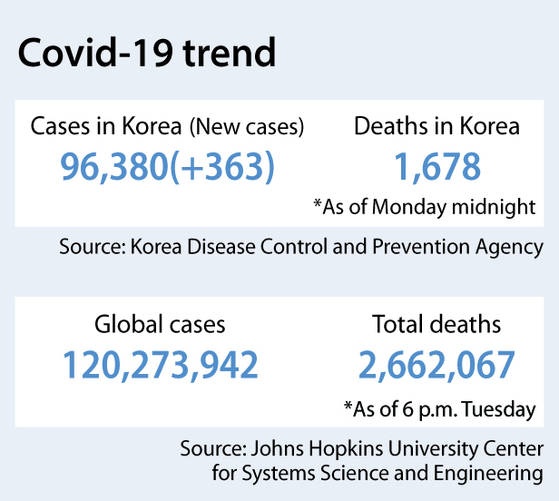 Health authorities aim to lower cases to below 200 within the next two weeks after seeing cases in the 300s and 400s in the past week. New infections were linked to churches, hospitals, nighttime entertainment facilities, fitness centers and bathhouses.

Of the local infections, 75 were reported in Seoul, 146 in Gyeonggi and 14 in Incheon. The greater Seoul area constitute between 70 to 80 percent of domestic infections and half the country’s population of 52 million.

There were 18 new imported cases, including three from Indonesia, two from India and one from Brazil.