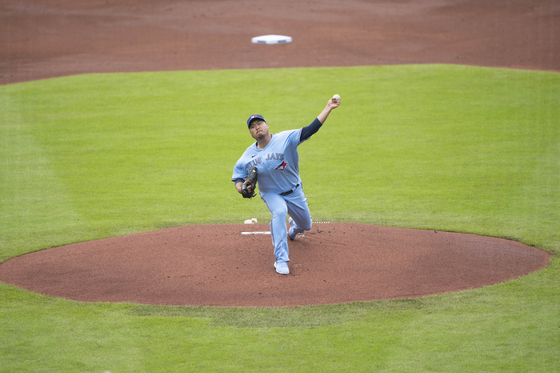 
Ryu Hyun-jin of the Toronto Blue Jays started the second half of the MLB season on blistering form on Sunday, pitching a complete game shutout against the Texas Rangers at Sahlen Field in Buffalo, New York.

Starting in the opening game of a double header, Ryu threw 83 pitches in seven full innings, giving up three hits and one walk with four strikeouts to lead the Blue Jays to a 5-0 win. Double header games are limited to seven innings in the majors this season, but Ryu's dominant outing still officially counts as a shutout.

Ryu, pitching what may well be his last start at the Blue Jays' temporary home in Sahlen Field after the Canadian government cleared the team to start playing in Toronto again, started as he meant to go on — with a four pitch inning to retire the Rangers in order.

The second inning started with a leadoff triple to Joey Gallo, but the Korean southpaw quickly rallied, throwing his a three-pitch strikeout to bolster his confidence before a pop out and another strikeout took care of the danger.

The third started with another strikeout and a groundout, before Ryu gave up a single followed by his only walk on the game. With two on and two out, Ryu bounced back with a four-pitch strikeout to end the inning.

The fourth and the fifth passed quickly, with Ryu retiring the Rangers in order in both innings, using four groundouts and a couple of flyouts to wrap things up with a bit of help from his defense. The Rangers last hit came in the sixth — a double to left field — but Ryu had well and truly found his groove by that point, using three groundouts and three flyouts to send the Rangers back to the clubhouse empty handed.

While Ryu tore through the Rangers on the mound, the Blue Jays were also productive at the plate, scoring two in the third, before adding a third with a solo homer in the fifth and two more in the sixth to take a solid 5-0 win.

It was a good day for the Canadian club, returning a couple of hours later to beat the Rangers 10-0 in the second game of the double header.

Sunday's dominant outing compounded the Toronto ace's return to form, drawing a line under a disappointing few games in the last month. Ryu posted a 5.35 ERA over a stretch of six starts from June 4 to July 1. He looked better in his final game before the break, allowing just the one run and throwing seven strikeouts in a 10-2 win over the Baltimore Orioles.

While the Orioles game suggested Ryu was feeling more comfortable at the plate again, Sunday's outing against the Rangers provided definitive proof that the starter is back on his game.

“That’s the best I’ve seen him in a while,” Blue Jays manager Charlie Montoyo was quoted as saying on MLB.com. “It’s his changeup. When his changeup is good, he’s going to keep people off-balance, because they don’t know what’s coming. It looks just like the fastball and his cutter, so that was No. 1. Then, of course his command. That was really good today.”

Ryu's changeup, generally the most important pitch in his arsenal, was on full display on Sunday — of his 83 pitches, 24 were changeups inducing three of his four strikeouts.

Ryu isn't the only Korean pitcher enjoying a run of good form — Kim Kwang-hyun of the St. Louis Cardinals on Saturday extended his scoreless streak to 21 innings, winning four games in a row.