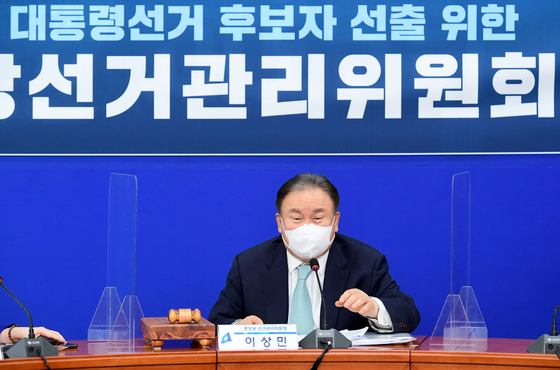 
The ruling party announced a five-week delay in its presidential primary due to the fourth wave of the Covid-19 pandemic.

The Democratic Party (DP) held a Supreme Council meeting Monday afternoon and approved a postponement of the presidential primary schedule by five weeks. Originally, the party was supposed to elect its presidential candidate on Sept. 5. Now that will be done on Oct. 10.

If the party is forced to hold a runoff because no candidate wins a majority in a first round, the final nomination will be announced later than Oct. 10.

“Even if we postpone the schedule by three weeks, the primary date will fall during the Chuseok holidays [of Sept. 20 to 22],” he said. “So we had to delay it further to operate the schedule with more stability.”

The party leadership had decided on June 25 that there would be no delay despite calls from some candidates such as former Prime Ministers Lee Nak-yon and Chung Sye-kyun, who wanted the primary to take place after more progress with vaccinations. The fourth wave of infections forced the party to reverse that decision.

Six politicians are currently running for the DP’s nomination. Earlier this month, the DP announced that six out of eight contenders had passed an elimination round,

The DP has introduced new rules for the upcoming primary. According to them, the party will not use an opinion poll to select its candidate. Paid party members and members of the general public who register to participate in the primary will be allowed to cast votes.

The party had planned to hold nationwide tours starting Aug. 7 and paid party members were to vote in their regions. Now the tours will start in Daejeon and South Chungcheong on Sept. 4. After voting tours of all metropolitan cities and provinces, the action will shift to Seoul on Oct. 10.

To form three groups of electorates from the general public, the DP also started accepting applications. The party will make three separate announcements of the groups’ vote counts during the nationwide tour period.

Youn said the application schedules for the second and third groups will be delayed.

The DP said candidates generally agreed with the need to delay the primary.

“We believe the primary must be delayed until herd immunity is formed,” said Bae Jae-jung, spokeswoman of the Lee Nak-yon’s campaign. “We accept the party leadership’s decision.”

Former Prime Minister Chung also issued a statement to announce his agreement with the delay.