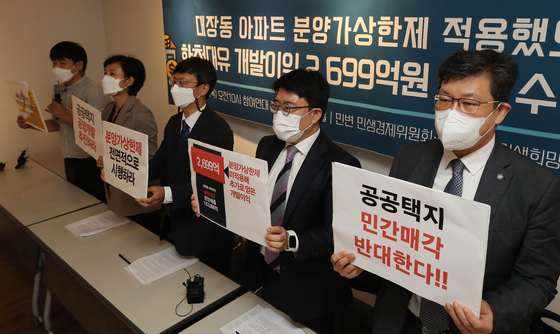 Representatives of the civic groups People's Solidarity for Participatory Democracy and Lawyers for a Democratic Society announce the results of their own investigation into profits earned by Hwacheon Daeyu from its investment in the Daejang-dong land development at a press conference in Jongno District, central Seoul on Thursday. [YONHAP]


A spokesman for former Prime Minister Lee Nak-yon suggested Thursday that Gyeonggi Governor Lee Jae-myung's involvement in the Daejang-dong development project in Seongnam, Gyeonggi, had created a "breach of trust" with the public, raising the issue's prominence in the primaries.

In a morning phone interview with KBS Radio, Seol Hoon, a spokesperson for Lee Nak-yon, who is running against Lee Jae-myung in the ruling Democratic Party's presidential primary, said that Gov. Lee could possibly be charged with breach of trust as he was the mayor of Seongnam at the time that the Daejang-dong project was planned.

“Lee Jae-myung said that he designed the Daejang-dong project," Seol said. "It is possible that he would be charged with breach of trust, since the Seongnam Development Corporation's former acting president Yoo Dong-gyu has already been arrested.”

Seol, who is a lawmaker in the National Assembly, also cited polls that show respondents view Gov. Lee as bearing significant responsibility for the scandal over the Daejang-dong project, although he did not specify which surveys showed this.

“While a probe will establish whether or not Gov. Lee should be charged with breach of trust, the fact that the people think he bears responsibility [in the scandal] is another form of breaching public trust.”

Seol also suggested that should Gov. Lee win the party’s presidential nomination — a likely prospect, given the governor's recent primary victories — the issue could become a liability for the ruling party to keep the Blue House in next March’s presidential race.

“Should [Lee] be charged with breach of trust, the DP’s candidate will have to undergo an election while facing legal issues. We might even be able to imagine a situation where the party’s candidate is arrested,” Seol said.

“Such a situation would pose a dire crisis for the party.”

Seol criticized the party’s leadership for pushing Gov. Lee as its candidate for the presidency. He also accused the party leadership of avoiding hosting televised primary debates to allow the Gyeonggi governor to skirt scrutiny on the issue.

“[The party leaders] are making up the excuse that they couldn’t reach an agreement with broadcasters to hold a debate,” Seol said. “I think they know such debates would be disadvantageous to Gov. Lee, who is a key figure in the Daejang-dong development.”

Although the scandal over the Daejang-dong project centers around accusations that Gov. Lee is close to Kim Man-bae, the owner of a small asset management company named Hwacheon Daeyu at the center of the controversy, the governor has thus far avoided being directly implicated in the project’s profit distribution set-up, which allegedly enabled small companies to reap outsized profits from small investments in the development.

However, disquiet within the ruling party and the government has not been quelled since Gov. Lee won large majorities in the DP’s Busan, Ulsan, and South Gyeongsang primaries on Saturday, all but solidifying his lead ahead of the three other DP contenders.

The Blue House only weighed in on the controversy with a tersely worded statement on Tuesday, where it said President Moon Jae-in is “seriously following the allegations surrounding the Daejang-dong development.”

The timing of the Blue House statement, which came after the weekend primaries, was the subject of speculation that the president was indirectly warning against Gov. Lee’s nomination.

In an interview with the JoongAng Ilbo on Wednesday, a high-ranking Blue House official who spoke on the condition of anonymity denied that the statement carried any hidden political opinion held by the president, saying media reports to that effect are “exaggerations.”