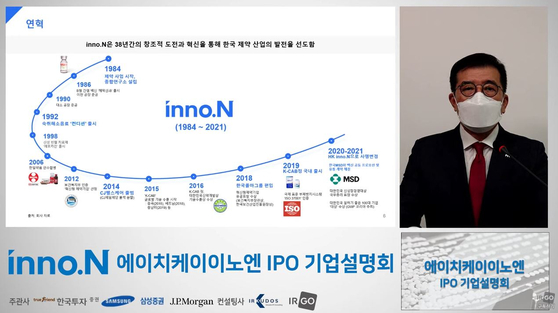 A spin-off from CJ CheilJedang’s pharmaceutical business, the company was founded in 2014 as CJ HealthCare. It was then acquired by Kolmar Korea in 2018 and changed its name to HK inno.N last year.

HK inno.N plans to offer 10,117,000 shares at between 50,000 won and 59,000 won each through the initial public offering (IPO). If the upper end of the range is hit, 596.9 billion won of stock will be sold. Korea Investment & Securities, Samsung Securities and JP Morgan are the underwriters.

Public subscriptions will take place on July 29 and 30. It is expected to make its Kosdaq debut early next month.

“HK inno.N will become a global bio and healthcare company with its pharmaceutical and bio technology and know-how, as well as high production capacity,” said HK inno.N CEO Kang Seok-hee during the online press conference.