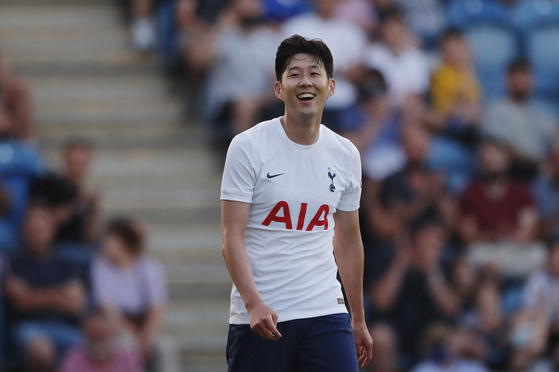 Son Heung-min is in action against Colchester in a preseason friendly in Colchester, England on Wednesday. [REUTERS/YONHAP]


Son Heung-min dominated in his first appearance in a Tottenham Hotspur shirt after the summer, playing a role in all three goals in Spurs' 3-0 victory over Colchester FC in a preseason friendly Wednesday.

Son opened the scoring against League Two side Colchester in the 11th minute, tapping the ball in to take a 1-0 lead. He was back three minutes later to assist Lucas Moura for the second, and again in the 38th minute to set up Dele Alli for the third. Son left the game at the top of the second half to allow new manager Nuno Espirito Santo to cycle through the rest of the squad in the early tuneup match.

Anything less than a win against Colchester, who play in the fourth tier of English football, would have been an embarrassment for Spurs, but that doesn't mean there weren't reasons to be satisfied with the easy win. Son looked strong only two days after rejoining the club for training on Monday, balancing well with the players on the pitch despite the absence of Harry Kane.

Tottenham on Saturday drew 1-1 with League Two side Leyton Orient, so Wednesday's game with the return of Son was also a much-needed morale boost for a team with a lot to prove this year.

“That was the idea, the tempo, the intensity, the rhythm of the game was good, the boys worked really, really hard and that was the main point, to work hard,” Nuno said after the game. “We’ll have a good session and at the same time, the players who didn’t have as much time will work, and we’ll keep our cycles until we approach the competition. It’s all about building, improving, getting faster, getting stronger. It’s all about that.”