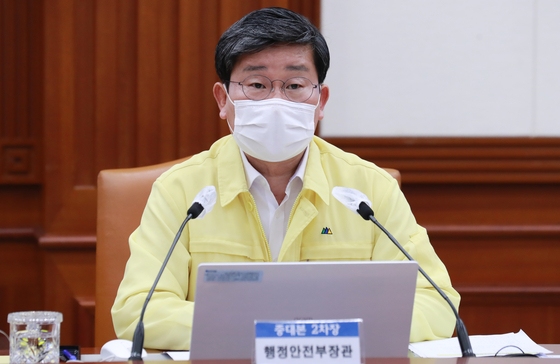 
Tough social distancing measures in the greater Seoul area will be extended for two weeks.

The Level 4 restrictions — the toughest in a four-tier system — will be maintained in Seoul, Incheon and Gyeonggi Province until Aug. 8, according to the Central Disaster and Safety Countermeasures Headquarters. The government started enforcing Level 4 measures in those areas July 12, and they were supposed to be relaxed Sunday.

Social distancing measures for other regions have yet to be decided.

According to the authorities, the Level 4 restrictions will get a bit tighter. Restrictions on private gatherings will be applied to sports that require multiple players. Business meetings that require overnight stays will also be banned.

The government is also planning to require big stores including department stores to keep records of visitors, like bars and restaurants already do.

Rules for weddings and funerals will be slightly changed. Until now, up to 49 relatives were allowed to attend such events. Going forward, 49 people is still the limit but they don't all need to be relatives.

The government said the goal of extending Level 4 restrictions is to bring the number of daily new cases below 1,000 in the capital region. If that is not accomplished by the end of the two-week extension, stronger measures such as limiting business operation hours will be considered.

Meanwhile, the government said Friday that 1,630 new cases, including 1,574 local infections, were reported Thursday. That number was slightly smaller than the previous day’s all-time high, but high enough for the government to extend the social distancing measures.

Thursday's 1,842 cases included 270 members of the Navy’s Cheonghae unit. The sailors were dispatched to the Gulf of Aden earlier this year for a peacekeeping and anti-piracy mission.

Since July 7, the daily caseload has remained above 1,000.