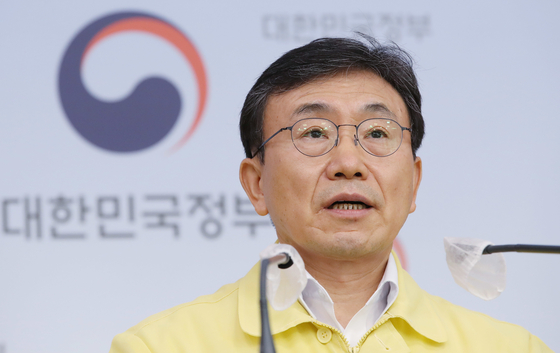 Minister of Health and Welfare Kwon Deok-chul announces social distancing measures for the Chuseok holidays and early October at a briefing at the Central Government Complex in Seoul on Friday. The current Level 4 measures will remain in place in the greater Seoul area and Level 3 measures throughout the rest of the country. [NEWS1]

“Considering the Chuseok holidays coming in three weeks, the government decided to maintain the Level 4 distancing measures in the greater Seoul area and Level 3 measures for the rest of the country,” said Health Minister Kwon Deok-chul in a press briefing at the Central Government Complex in Seoul.

“Because we are still in the thick of the current wave of infections, with around 1,700 daily cases, we cannot ease the distancing measures.”

The greater Seoul area, which consists of Seoul, Incheon and Gyeonggi, has been under Level 4, the strictest distancing measures, since the onset of the fourth wave of the pandemic in mid-July, when daily cases of infections began to spike from just a few hundred to around 1,500, surpassing 2,000 by early August. As of Friday, daily cases have not dropped below 1,000 for nearly two months.

There will be slight changes to the restrictions starting Monday.

In Level 4 areas, private gatherings of up to six people will be allowed at cafes, restaurants and homes until 6 p.m., if the groups include two fully vaccinated people.

After 6 p.m. in the Level 4 areas, private gatherings of up to six people will still be allowed, but only if the group includes four fully vaccinated people.

In Level 3 areas, private gatherings of up to eight people will be allowed throughout the day, if the groups include four fully vaccinated people.

Another change will allow all restaurants, cafes, noraebang, theaters, gyms, PC bang and hagwon in the Level 4 areas to operate until 10 p.m., extending the closing time by one hour.

Health authorities also announced a restriction on the number of people allowed to gather in homes during the week of the Chuseok holidays, which fall on Sept. 20, 21 and 22.

From Sept. 17 to 23, families throughout the country will be allowed to gather in homes in groups of up to eight people if the groups include four fully vaccinated members.

Another change applies to nursing homes, which were not allowed in-person visits by relatives under Level 4.

From Sept. 13 to 26, relatives will be allowed to visit homes with some conditions.

Both the patient and the visitor will have to be fully vaccinated to be allowed to meet. If either is not vaccinated, they will have to communicate through windows or a device to keep them socially distant.


Korea added 1,675 new cases Thursday, of which 34 were imported, according to the Korea Disease Control and Prevention Agency (KDCA), bringing the total number of cases in the country to 257,110.

Five people died from Wednesday to Thursday, bringing total deaths to 2,308. A total of 26,184 are being treated for Covid-19, of whom 367 are in critical condition.

“We are hoping to have 70 percent of the population given their first shot of vaccine by Chuseok, and to have nearly half of the population fully vaccinated by the end of September,” Kwon said. “Our experts have predicted that if the current rate of social distancing and vaccinations continue, we should be able to see the number of daily infections drop by around mid- to late-September.”