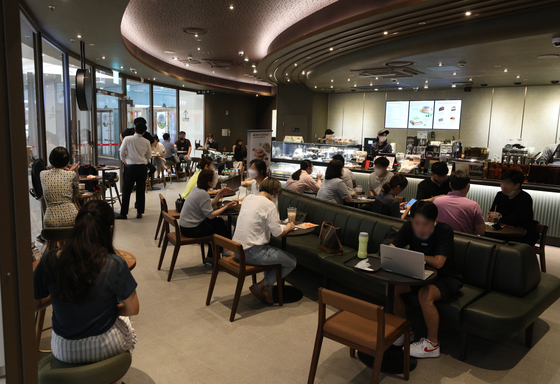 Customers fill a cafe in Seoul on Aug. 11, when the number of daily new Covid-19 cases surpassed 2,000 for the first time since the onset of the pandemic. [NEWS1]


Restaurants will have to close earlier and vaccinated people will be allowed to gather in greater numbers, but most of the Level 4 social distancing measures in place in the greater Seoul area, Busan, Daejeon and Jeju have been extended another two weeks through Sept. 5, health authorities announced Friday.

“The government has decided to extend the current social distancing level for two weeks from Monday, Aug. 23, to Sunday, Sept. 5,” said Lee Gi-il, a senior official of the Central Disaster and Safety Countermeasures Headquarters, in a press briefing Friday. “We will maintain the current system in the greater Seoul area, Busan, Daejeon and Jeju where the Level 4 measures have been applied.”

The greater Seoul area, which consists of Seoul, Incheon and Gyeonggi, has been under the Level 4 distancing measures since the onset of the fourth wave of the pandemic in Korea in mid-July, when the daily cases of infections began to spike from just a few hundred to around 1,500, surpassing 2,000 by early August.

Under these measures, private gatherings of up to four people were allowed until 6 p.m., and only up to two after 6 p.m.

The Level 4 measures to be implemented from next Monday through Sept. 5, however, contain some minor changes, such as closing cafes and restaurants earlier.

“In the areas under Level 4 measures, restaurants and cafes will only be allowed to take take-out and delivery orders after 9 p.m.,” Lee said Friday. “Eating inside convenience stores after 9 p.m. is also banned.”

Another change will allow vaccinated people to gather in larger numbers for private gatherings in the evenings.

Up to two fully vaccinated people will additionally be allowed to join a group of two other people, in effect allowing a group of at most four to gather after 6 p.m.

“In the case of including those who have completed inoculation, gatherings of up to four people will be allowed from 6 p.m. to 9 p.m.,” Lee said.

People who received their second dose of vaccination two weeks prior count as a fully-vaccinated person.

The rest of the country is placed under Level 3 measures, which limits the number of people in private gatherings to four at most, regardless of the hours.

In the Level 4 areas, all public events and rallies remain banned, except weddings, funerals and academic conferences, which can be attended by 49 people at most.

Korea added 2,052 new Covid-19 infections on Thursday, of which 51 were imported. Most of these were located in the greater Seoul area — 549 cases in Seoul, 633 cases in Gyeonggi and 117 cases in Incheon, according to Korea Disease Control and Prevention Agency (KDCA).

For the country's total population, 48.3 percent had received their first dose of a vaccine as of Thursday, and 21.6 percent have completed their vaccination, according to the KDCA.