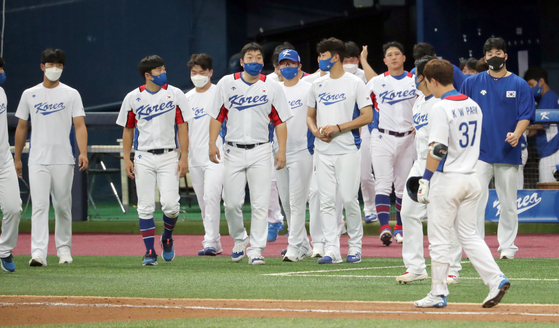 The Korean national baseball team leave the pitch after being held to a 2-2 tie by the LG Twins at Gocheok Sky Dome in western Seoul on Saturday. [ILGAN SPORTS]

The Twins very nearly took the game, with Team Korea only managing to tie the score at the bottom of the ninth.

LG starter Son Ju-young put on a strong performance against the best bats in the country, giving up just one walk and one hit in three scoreless innings.

The Seoul club took a 2-0 lead at the top of the sixth, which Oh Jae-il of the Samsung Lions chipped away at with a solo home run at the bottom of the seventh.

Shortstop Oh Ji-hwan, normally of the Twins, was sent to the hospital after taking one of his regular season teammate's studs to the face in the sixth inning, but the injury isn't believed to be too serious.

The national team finally managed to draw level in the ninth, when Kim Hye-sung of the Kiwoom Heroes hit a sacrifice fly with the bases loaded and one out, bringing Kang Min-ho of the Samsung Lion home to tie the score at 2-2.

Park Kun-woo of the Doosan Bears was next up with the chance to put Korea ahead, but hit the ball straight to first base to end the game.

The national squad beat Futures League side Sangmu 9-0 in their first tuneup game yesterday. After Sunday's tie, Korea will be hoping for better things in their final exhibition game against the Kiwoom Heroes tomorrow, also at Gocheok Sky Dome.

The national team flies to Japan on Monday and will begin their Olympic title defence against Israel on Thursday.