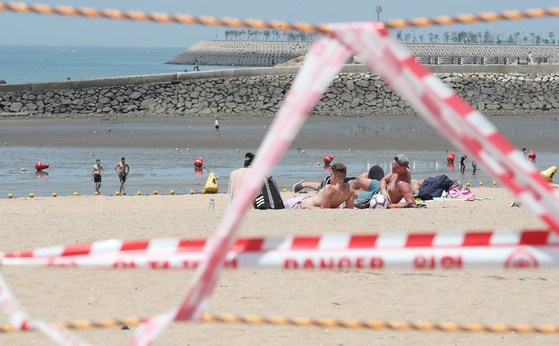 Tourists sit maskless in the sand behind the control line at Eurwangni Beach in Incheon on Sunday, despite the temporary closure of four major beaches in Incheon, including Eurwangni, Wangsan, Hanagae and Silmi, following the Level 4 measures applied in the region. Incheon temporarily closed beaches in Jung District until July 25 and banned the use of shower rooms, parasols, tents and rental facilities. [NEWS1]


Social distancing measures outside the greater Seoul area will all be raised to the second-highest of the distancing system starting Tuesday, as Covid-19 cases surge across the country.

“Virus spread in non-capital areas has been a major concern recently,” President Moon Jae-in said during Sunday’s interagency meeting on Covid-19, joined by 17 local governments. This is the first time in seven months for the president to chair such meeting.

“With the ‘balloon effect’ [infections spreading to other regions with less harsh regulations] following the strengthened distancing measures in the Seoul metropolitan area and increased travel to vacation sites, it is clear that the virus is spreading nationwide,” Moon said.

Patients reported outside of greater Seoul have accounted for more than 30 percent of total cases for eight days in a row, and reached nearly 40 percent on Sunday.

Under Level 3 rules of the four-tier system applied until Aug. 8, gatherings of more than four people will be banned, and only 49 people will be allowed at events.

The gathering ban on more than four people has already been adopted in non-capital regions last Monday.

Indoor sports stadiums and religious facilities can only be filled to 20 percent of their capacity.

President Moon previously announced that Level 3 measures will be applied from Monday, but the Ministry of Health and Welfare allowed one more day to prepare for the change following requests from local governments.

The central city of Daejeon, however, decided to hike its restrictions to the strictest Level 4 from Tuesday, which will remain in effect until Aug. 8.

Under the Level 4 measures, gatherings of more than two people are banned after 6 p.m., while up to four people can get together during other times of the day. All events and demonstrations are prohibited except for single-person protests.

Restaurants and cafes are allowed to open until 10 p.m., while clubs and bars that allow dancing must shut completely.

All schools must switch to online classes.

The eastern coastal county of Yangyang, Gangwon, also went to Level 4 from Sunday, just two days after going to Level 3. The tighter measures will be applied through Aug. 1.

Seoul, Gyeonggi and Incheon, the country's hardest-hit regions, will be under Level 4 restrictions for another two weeks until Aug. 8, health authorities announced last Friday.

The toughest virus curbs have been applied since July 12 and were supposed to be relaxed on Sunday, but the government decided to extend the ongoing measures as there were no significant signs of infections decreasing.

However, stricter rules have been added in the greater Seoul area.

Amateur sports teams were allowed to exceed the four-person limit but from Monday will face the same restrictions as private gatherings.

Business meetings that require overnight stays will also be banned.

Rules for weddings and funerals, on the other hand, were slightly eased.

Weddings and funerals could host up to 49 people, but only relatives were allowed to attend.

Going forward, the limit will remain at 49, but they don't have to be relatives.

“We are at a major crossroads to curb the virus spread,” President Moon said.

He continued, “The government, in desperation, extended the Level 4 measures in the Seoul metropolitan area by two weeks. I am very sorry for the prolonged hours of pain for citizens.” 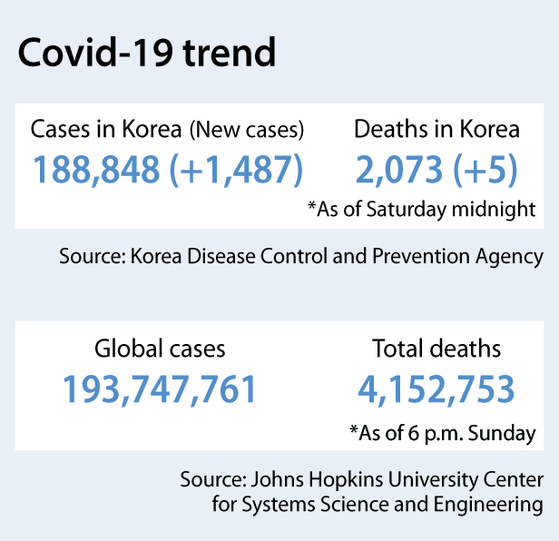 Korea added 1,487 new coronavirus cases on Sunday, the highest Sunday figure, bringing the total caseload to 188,848, according to the Korea Disease Control and Prevention Agency (KDCA).

Among the new cases, 1,422 were locally transmitted — with 876 coming from the greater Seoul area and 546 from outside regions.

Five people died from Covid-19, bringing the total number of fatalities to 2,073.

People in the Seoul metropolitan area will get Pfizer shots, while others will receive Moderna.

They will receive their second shots from Aug. 23.

The country temporarily extended the interval between the first and second Pfizer jabs by a week to four weeks, the same as Moderna, in order to reduce confusion at medical clinics.

As of Saturday midnight, around 16.89 million people, or 32.9 percent of the country's population, had received one shot of a Covid-19 vaccine, the KDCA said.

Around 6.85 million people, or 13.4 percent, have been fully vaccinated.