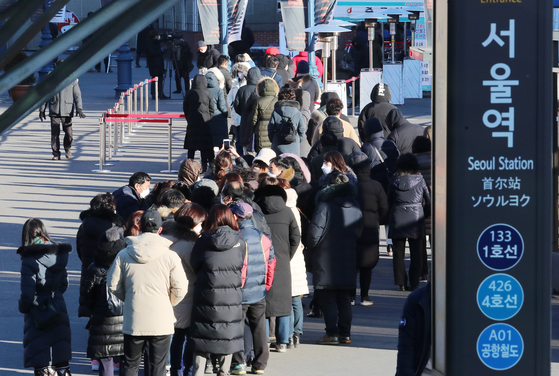 Daily coronavirus cases jumped back up to 880 Monday as the nation inched closer to the central government’s threshold for enforcing Level 3 social distancing measures.

Of Monday’s total infections, 848 were domestic cases, while the remaining 32 cases were imported, according to data from the Korea Disease Control and Prevention Agency (KDCA) Tuesday morning.

The vast majority of Monday’s domestic infections were detected in the Seoul metropolitan area — 246 in Seoul, 274 in Gyeonggi and 55 in Incheon. All three zones are currently subject to Level 2.5 restrictions, the second-highest level in the five-tier social distancing scheme controlled by the central government.

Most of the rest of the country is subject to looser Level 2 rules.

Based on updated guidelines created by the central government last month, the country needs to see an average of between 800 and 1,000 new domestic cases per day, or more, over the previous week for restrictions to be elevated to Level 3. As of Monday, the corresponding figure was 774.7. 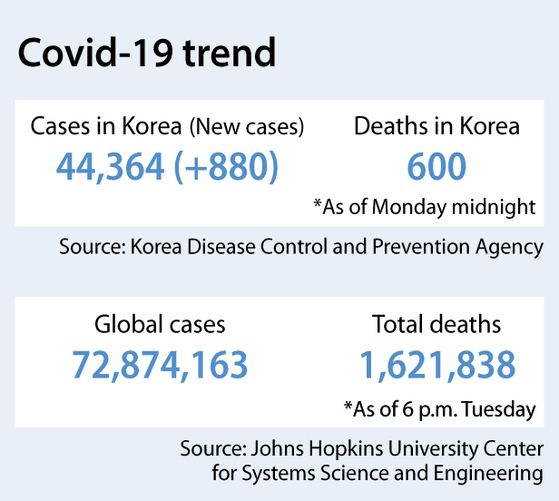 Restaurants, coffee shops, funeral halls, hotels and motels can remain open, but will face other restrictions.

Health authorities Tuesday said they were monitoring the situation closely and holding internal discussions on the need to raise restrictions to Level 3. Yet at the same time, they stressed that raising the social distancing level won’t be a silver bullet.

Sohn Young-rae, a spokesperson for the Central Disaster Management Headquarters, blamed the public.

In a press briefing Tuesday, Sohn said the country hasn’t seen any concrete improvements in curbing the spread of the virus since Level 2 measures were first imposed on the greater Seoul area in late November because members of the public weren’t abiding by them.

Even under Level 3 restrictions, a lack of cooperation by the public will only have a limited positive effect, Sohn said.

“In that case, business owners would suffer greatly even as infections don’t drop.”

Aside from any “pre-emptive measures,” Sohn continued that it’s imperative to devise a way to raise public participation in the government’s decisions, but didn’t elaborate further.


Aside from the greater Seoul area, 49 new cases were added in Ulsan Monday, 40 in Busan, 37 in South Chungcheong, 32 in Daejeon, 24 in North Chungcheong, 18 in Daegu, 16 in South Gyeongsang, 15 in North Gyeongsang, 13 each in Gangwon and North Jeolla, nine on Jeju Island, five in Gwangju and one each in Sejong City and South Jeolla.

All of the nation’s 17 major cities and provinces added at least one new case.

Thirteen patients died Monday, raising total deaths to 600, while 457 people recovered, bringing entire recoveries to 32,559. As of Monday at midnight, Korea had counted 44,364 Covid-19 patients in all.

In explaining the cause of the surge, health authorities Tuesday said that about 30 percent of newly diagnosed patients over the past week were aged 60 or older, and in many cases, linked to several clusters that emerged from nursing homes and hospitals for the elderly. In late November, that share of patients was roughly 24 percent.

In Ulsan, 300 kilometers (186 miles) southeast of Seoul, a cluster of at least 206 coronavirus patients has been detected at Yangji Hospital, a medical facility for older people.

In Gimje, North Jeolla, 196 kilometers south of Seoul, at least 62 people were diagnosed with the virus on Monday and Tuesday at the Kimje Ganaan Assisted Living Facilities, a nursing home.

Exactly how the virus got into both facilities remains unknown. For the Gimje nursing home, however, North Jeolla officials pointed the finger at its employees, saying they apparently brought the virus into their workplace and flouted social distancing guidelines.

“In terms of preventing the spread of the virus, the most important thing is to wear a face mask,” Kang Yeong-seok, head of health care at the North Jeolla Provincial Government, told reporters during a Tuesday briefing. “Even during meals, for instance, people shouldn’t talk to each other. If [the nursing home] had complied with these rules, this would never have happened.”

Officials said most patients in the Gimje cluster were older people with underlying conditions.

With the rise in virus cases showing no signs of slowing — and amid reports that the United States has begun administering Covid-19 vaccines to frontline medical workers — several lawmakers in the main opposition People Power Party (PPP) Tuesday slammed the Moon Jae-in administration for dragging its feet on vaccines procurement.

They urged Moon to release details on when the vaccines will be rolled out to the Korean public and how the government is planning to curb the spread until then.

Last week, the Ministry of Health and Welfare said the government has preordered enough Covid-19 vaccines from several foreign drug companies to immunize 44 million people, or 85 percent of the national population. The first batch is expected to arrive next February or March, but officials did not say when the shots would be administered to the public, only underscoring the need to take thorough safety precautions to ensure their safety.