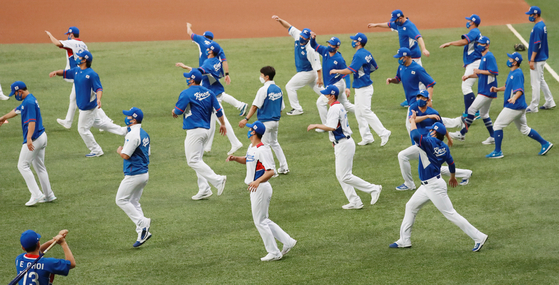 
The Korean Olympic baseball team head to the 2020 Tokyo Olympics as the defending champions, having won gold at the 2008 Beijing Olympics when the sport was last contested.

Korea will send 11 pitchers to the Games — Choi Won-joon of the Doosan Bears, Ko Young-pyo of the KT Wiz, Go Woo-suk of the LG Twins, Cho Sang-woo of the Heroes, Park Se-woong of the Lotte Giants, Won Tae-in of the Samsung Lions, Kim Min-woo of the Hanwha Eagles, Cha Woo-chan of the Twins, Lee Eui-lee of the Kia Tigers, Kim Jin-uk of the Lotte Giants and Oh of the Lions.

Kim Jin-uk was also a late addition, replacing infielder Park Min-woo of the Dinos who withdrew from the tournament after breaking Covid-19 rules.

Dinos catcher Yang Eui-ji will take the lead behind the plate, with support from Kang of the Lions. 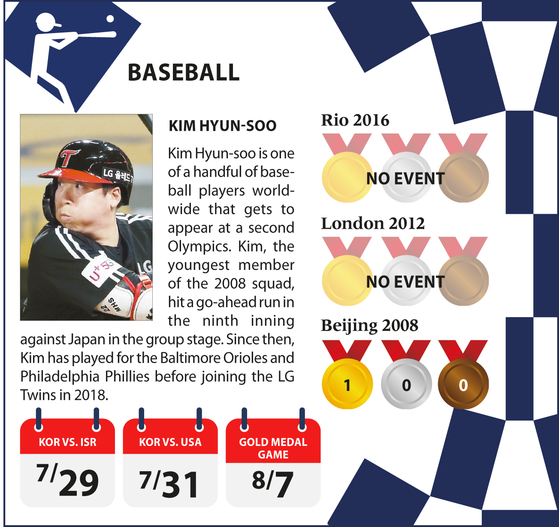 Four outfielders — Park Kun-woo of the Bears, Kim Hyun-soo of the Twins, Lee Jung-hoo of the Heroes and Park Hae-min of the Lions — complete the roster.

The squad heads to Tokyo under the guidance of manager Kim Kyung-moon, who also led the team to a gold medal at the Beijing Games.

After finishing the 2008 Olympic qualifying tournament in second place behind Canada, Korea tore through the Olympic tournament, winning all seven group stage games, before beating Japan 6-2 in the semifinals and Cuba 3-2 in the final to take home the gold medal.

Baseball was then excluded from the 2012 London Olympics and the 2016 Rio Games, making its return for the first time since 2008 this year — and likely the last time for a while as the Olympics heads to Paris in 2024.

Korea earned its spot at the 2020 Games after finishing second at the 2019 WBSC Premier12. Mexico, who finished in third place, also earned a berth from the tournament, with winners Japan already guaranteed a spot as the host nation.

Japan, Mexico and the Dominican Republic will compete in Group A, with Korea, Israel and the United States in Group B.

With only six teams in the tournament, an unusual format has been devised that sees the two groups play round robins, with all six teams then moving through to the knockout stage in positions weighted based on their performance in the group stage. In total, there will be 16 games of baseball running from July 28 to Aug. 7.

Korea's opening game will be against Israel at 7 p.m. on July 29, followed by a game against the United States at 7 a.m. on July 31, after which the extended knockout stage will begin.