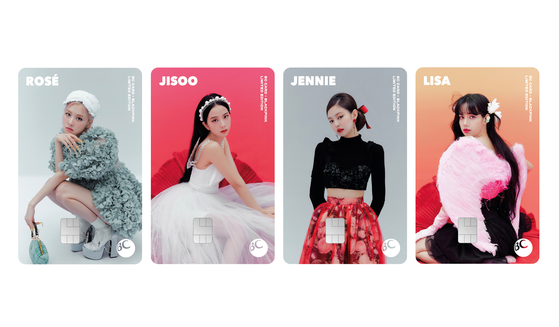 BC Card has newly released the "Blackpink Card." [BC CARD]


Korean credit card companies are pushing to collaborate with K-pop agencies to launch customized products for fans who are becoming increasingly important customers across most industries.

Earlier this week, credit card giant BC Card released a new product with K-pop giant YG Entertainment. Dubbed the "Blackpink Card," the new credit card offers fan-friendly features like discounts on ticket purchases and streaming, according to the two companies.

Blackpink’s four members — Jisoo, Jennie, Rosé and Lisa — also took part in the visual design of the credit card, which comes in 10 different styles, they added.

"We hope the partnership will be an opportunity to provide more for fans with the fifth anniversary of Blackpink’s debut coming up," Hwang Bo-kyung, chief of YG Entertainment, said. The four-piece act is set to celebrate its fifth anniversary next month.

BC Card, which picked Blackpink as its first partner for a K-pop credit card, anticipated that the collaboration would provide more business opportunities targeting the so-called MZ generation (millennials and Generation Z).

This is not the first attempt by a credit card company to partner with a K-pop agency. In early July, Shinhan Card announced it had signed a partnership with Weverse Company, a Hybe affiliate, to launch a new credit card product.

Weverse is an affiliate of the K-pop behemoth behind BTS that runs fan community platforms and sells merchandise. There are nearly 30 artists on the platform, including BTS, CL and Treasure, with fans from 233 countries using the platform.

The financial firm said they plan to launch customized products for fans in the second half.

A 2020 report by IBK Securities Co., which cited figures by Hybe, estimated the fandom industry to be worth 7.9 trillion won ($6.9 billion). The culture ministry's estimate also showed that BTS hitting No. 1 on Billboard with "Dynamite" created an economic effect of 617.4 billion won.

Dunamu partners with BC Card on metaverse-linked credit card