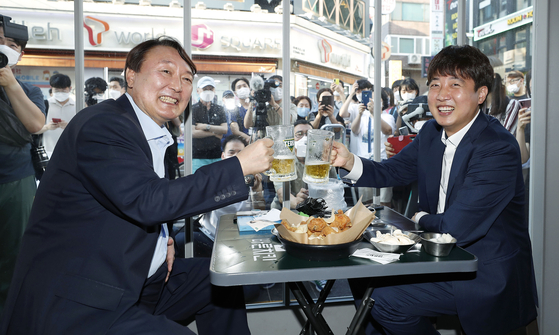 
Competition is heating up between Choe Jae-hyeong and Yoon Seok-youl, both former top officials of the Moon Jae-in administration who wish to score a victory with conservative voters in next year’s presidential election.

Choe, former head of the Board of Audit and Inspection (BAI) who joined the main opposition People Power Party (PPP) on July 15, registered his candidacy with the National Election Commission (NEC) on Monday, formally starting his run for the March 2022 presidential election. “It is important that the PPP join forces with all voters to win the next election,” Choe said. 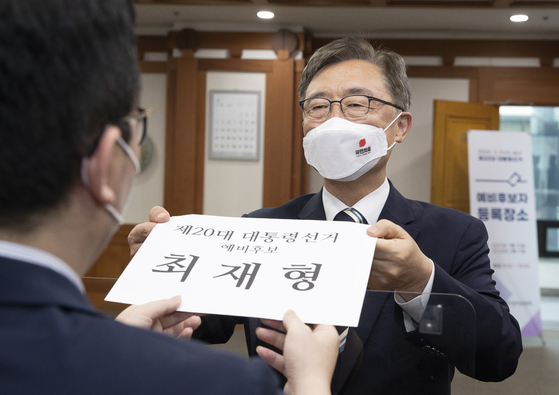 Former head of the Board of Audit and Inspection Choe Jae-hyeong registers his presidential candidacy with the National Election Commission on Monday. [NEWS1]


After stepping down from the chairmanship of the BAI on June 28, Choe made a quick decision to join the PPP 17 days later. He has been actively participating in the party’s events to appeal to conservative voters and communicate with PPP lawmakers ahead of the party’s presidential primary, scheduled for August.

Yoon, former prosecutor general, remains without a party affiliation as of Monday. He registered his candidacy with the NEC on July 12 as an independent.

In the latest presidential poll, Choe’s support rating soared, while Yoon suffered a significant drop in his rating. According to the Korea Society Opinion Institute (KSOI) on Monday, Yoon scored 26.9 percent in the poll conducted on Friday and Saturday, recording a drop of 3.4 percentage points from the previous week’s survey. He is still the frontrunner of the poll.

Choe recorded 8.1 percent, up by 2.5 percentage points from the previous week. He was ranked fourth in the latest survey.

Meanwhile, speculation grew Monday that Yoon will join the PPP next month to run in the largest opposition party’s presidential primary, following his meeting with PPP Chairman Lee Jun-seok on Sunday.

They met for about 90 minutes over fried chicken and beer at a bar in Gwangjin District of eastern Seoul and later briefed reporters about their talks.

“I realized that there are many things we must do together to win the presidency and rebuild the country,” Lee said.

“About a month has passed since I told the people that I would enter politics on June 29,” Yoon said. “I know the time for my decision is approaching. … I told Lee to wait for my decision, and Lee agreed.”

“I have removed more than half of the uncertainty about Yoon,” Lee said, hinting that Yoon will soon join the PPP. “Our party members and supporters can rest assured.”

Yonhap News Agency reported Monday, without naming its source, that Yoon told Lee that he will join the PPP around Aug. 10. Yoon also met with Rep. Kim Gi-hyeon, floor leader of the PPP, for another 90 minutes, following his meeting with Lee, and discussed his plan to join the PPP, Yonhap reported. Kim urged Yoon to do so as soon as possible, and Yoon also confirmed that he will soon.

Later on Monday, Yoon is scheduled to meet with Seoul Mayor Oh Se-hoon. Oh won the post in the April by-election as the PPP candidate.

While Yoon remains outside of the PPP as of Monday, many renowned PPP politicians have joined his campaign.

The PPP said last week that it will hold an elimination round on September 15 to select eight candidates to run in the main primary. Candidate registration is scheduled for late August.