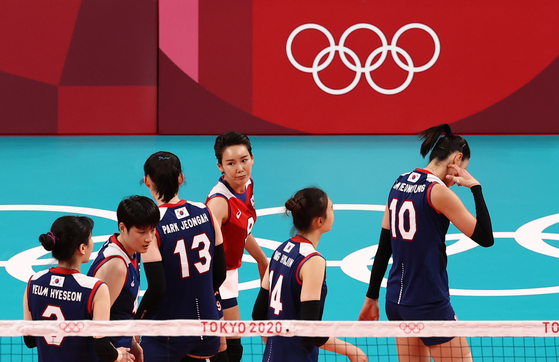 The Korean volleyball team looks disappointed after losing a point at their first women’s volleyball match against Brazil at Ariake Arena in Tokyo on Sunday. [YONHAP]


The Korean women's volleyball team lost its first game of the 2020 Tokyo Olympics to Brazil in three straight sets on Sunday evening.

Korea opening the scoring at the beginning of the game with two errors from the Brazilian side, but 24 minutes later, Korea dropped the first set a little too easy, losing 25-10.

The second round also didn't go Korea's way, but the team was able to trail the South American powerhouse by just one or two points throughout the set, with Yang Hyo-jin scoring Korea’s first block point at 20-17.

The Brazilians rallied to take the score to 24-20 and Korea requested a time out.

Despite putting put a hard fight, the second set ended 25-22, lacking blocks and a strong defense.

Korea played a strong game in the third set, taking an early 3-1 lead before the Brazilian quickly caught up to a 10-10 tie.

At 14-12, Yang pulled out another great block and an attack error brought the score bacjk to a 14-14 tie once again.

At 16-14, the referee blew his whistle indicating that the ball had touched the floor, but the decision was overturned by the VAR, showing that Park had pulled off a pancake dig, dropping her hand flat on the ground to save the ball. 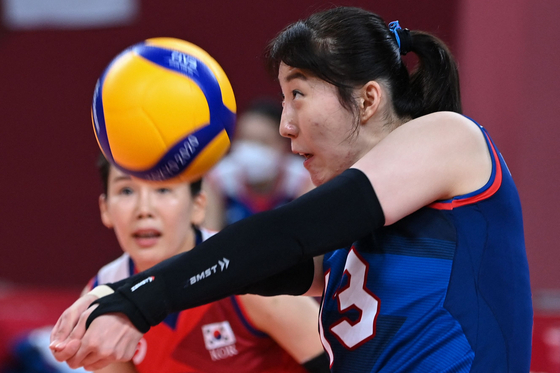 Park Jeong-ah hits the ball in the women's preliminary round pool A volleyball match between Brazil and Korea during the Tokyo 2020 Olympic Games at Ariake Arena in Tokyo on Sunday. [AFP/ YONHAP]


The VAR nullified Brazil’s 17th point and the score went to 16-14. After many attempts to narrow the gap, the third set finished 25-19 after 31 minutes, Korea losing the first match of the round robin.


Korea had only three blocks compared to Brazil’s 10, but had better reception.

Kim Yeon-koung scored the most for Team Korea, making 12 points. 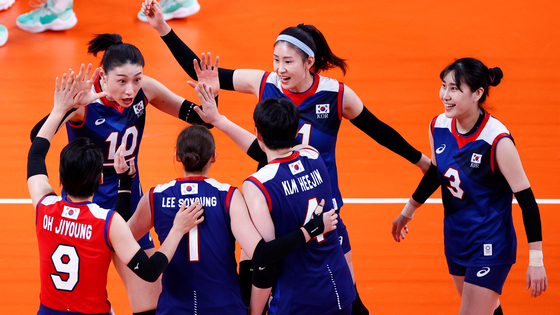 The Korean volleyball team celebrate after scoring a point in the women's preliminary round pool A volleyball match between Brazil and Korea during the Tokyo 2020 Olympic Games at Ariake Arena in Tokyo on Sunday. [AFP/ YONHAP]


Despite losing three sets in a row, Korea put up a good fight against Brazil, as the country had finished the Volleyball Nations League as runner-up in June where Korea finished second to last.

Kim Su-ji and Kim Hee-jin did not play at the Volleyball Nations League that was held through May to June due to injuries but returned to the squad represent Korea on the big stage.


Korea is in Pool A alongside Japan, Serbia, Brazil, the Dominican Republic and Kenya. During the round robin, Korea plays all five countries in the same pool with the top four advancing to the quarterfinals.