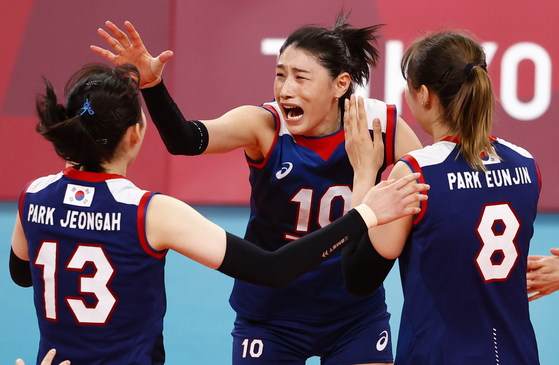 
Korea will face its toughest challenge yet from world No. 2 Brazil in the semifinals of the 2020 Tokyo Olympics volleyball tournament on Friday.

Korea and Brazil have history — and it doesn't look good for Korea. The two sides have met twice this year, at the Volleyball Nations League in June and in the group stage at the 2020 Tokyo Games. On both occasions, the South American side won in straight sets.

But the Korean team Brazil faces tomorrow has learned a few things. Over the last week, Korea has increasingly shown that world rankings don't mean everything on the big stage. Grit and determination matter more, and that's what has brought Korea to the semifinals, having pulled off three grueling five-set victories against the higher ranked No. 7 Dominican Republic, No. 11 Japan and No. 4 Turkey, all countries Korea had lost against during the Volleyball Nations League.

Talismanic captain Kim Yeon-koung was in the middle of it all, giving all she had to make her last attempt at a medal count. Kim Yeon-koung made history earlier in the Games as the first player ever to record 30 or more point in an Olympic match four times. 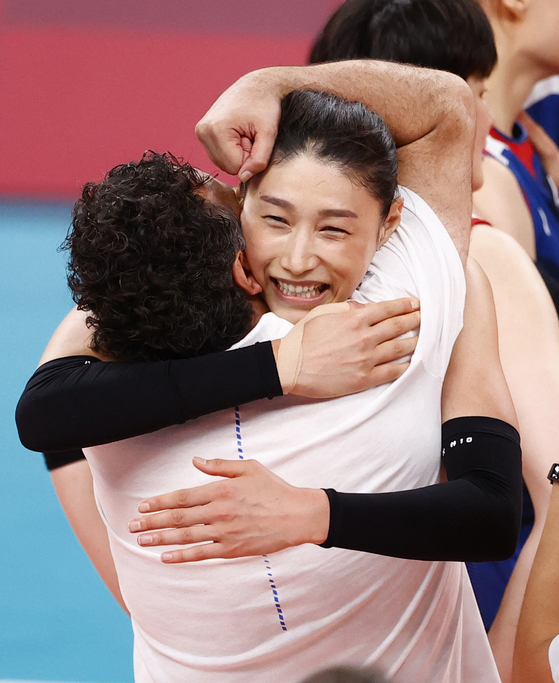 Kim Yeon-koung and head coach Stefano Lavarini embrace after the match against Turkey at the 2020 Tokyo Olympics women's volleyball quarterfinals on Wednesday. [REUTERS/YONHAP]


"Kim Yeon-koung is one of the greatest players in the history of volleyball, maybe even the best," Korea's head coach Stefano Lavarini told KBS Sports ahead of the Tokyo Games. "For me, [she is] an impressive example of a leader, of a charismatic person."

Now that Korea has earned a ticket to the semifinals for the first time since London 2012, Korea will have to put up a serious fight against the second best team in the world to get a chance at a medal.

Despite being outranked, Korea does has experience winning against the South American powerhouse. Korea won three sets to Brazil's one back in 2019 at the FIVB World Cup, and at the 2012 London Games, Korea defeated Brazil in straight sets during the preliminaries.

Kim Yeon-koung, Yang Hyo-jin and Kim Hee-jin, who were there in 2012 when Korea beat Brazil, will flex their giant-killing muscles once again, looking for a chance to medal in women's volleyball after 45 years. The last time Korea medaled in the sport was at the 1976 Summer Games.

Korea will face Brazil at 9.pm. on Friday at the Ariake Arena in Tokyo.