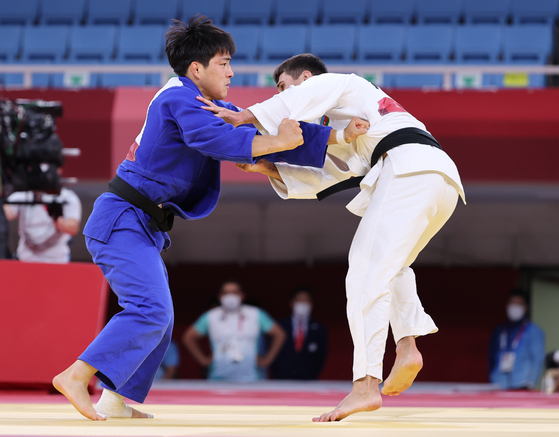 Korea's An Chang-rim fights Rustam Orujov of Azerbaijan in the men's 73 kilogram bronze medal fight at the Nippon Budokan in Tokyo on Monday. [NEWS1]


An Chang-rim picked up Korea's second judo medal at the 2020 Tokyo Games, beating Rustam Orujov of Azerbaijan in the men's 73 kilograms bronze medal match on Monday.

An, the world No. 4, beat No. 2 Orujov with a Waza-ari just three seconds before the end of normal time. A Waza-ari isn't an immediate knockout move, but it gave An the one point he needed to take home bronze.

An fought four bouts on his way to the bronze medal match, first beating Fabio Basile of Italy in the round of 32 before taking down Khikmatillokh Turaev of Uzbekistan in the round of 16. In the quarterfinal, he beat Tohar Butbul of Israel. An won all three fights with a Waza-ari.

In a tough semifinal match, An lost to Lasha Shavdatuashvili of Georgia, missing out on the final but earning a chance to compete for bronze.

An is a two-time Olympian, having represented Korea at the 2016 Rio Games, but this is his first medal.

Korea headed to Tokyo hoping to beat Japan at its own game in judo. So far An Chang-rim and his teammate An Ba-ul, who medaled in the men's 66 kilogram event, have both taken home bronze.