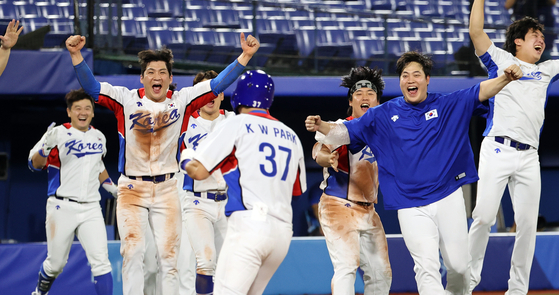 The Korean baseball team celebrates after beating Israel in extra innings in the first game of the 2020 Tokyo Olympics on Thursday. [YONHAP]


The Korean national baseball team scraped together a 6-5 victory in extra innings in its opening game of the 2020 Tokyo Olympics on Thursday, beginning its gold medal title defense with a win, even if it was a strange one.

It was a bizarre matchup at Yokohama Stadium in Yokohama, Japan, that saw Korea, the No. 3 team in the world according to the WBSC, very nearly lose to world No. 23 Israel.

On paper the box score is already surprising — Israel opened the scoring first with two runs in the third, Korea caught up two in the fourth, Israel pulled ahead again with two in the sixth,  Korea took the lead for the first time with three in the seventh then blew that lead at the very last minute at the top of the ninth before finally winning in extra innings at the bottom of the tenth.

If that wasn't exciting enough, some of the details of the game start to read like a low-budget '90s movie.

That each team hit three home runs isn't that surprising in its own right, but that one of Israel's homers came at the top of the ninth inning to tie the game against Oh Seung-hwan, statistically the greatest closer that Korea has ever produced with experience in the United States and Japan, was unexpected.

Korea's offense was led by Oh Ji-hwan, who went three-for-three with a home run and three RBIs. But it wasn't Oh that came through to win the game for Korea in the 10th inning. Instead, it was Israeli pitcher Jeremy Bleich that beaned catcher Yang Eui-ji with the bases loaded, walking Park Kun-woo home to end the game like the farce it was.

But farcical or not, a win is a win and that is all that matters for Korea moving forward. The national team, the defending champion from the 2008 Beijing Olympics, are looking to take home gold again and they started that journey successfully on Thursday.

Korea will next take on the United States at 7 p.m. on Saturday, before advancing to the extended knockout round of the competition.