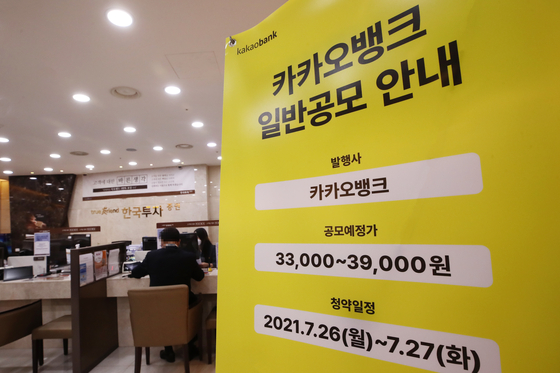 Customers consult at counters to subscribe to KakaoBank's initial public offering Tuesday at an office of Korea Investment & Securities in Seoul. The two-day public subscription period ended on Tuesday. [YONHAP]

KakaoBank is suffering from analyst reports that its initial public offering (IPO) prices are too high, even as it ended its two-day public subscription period Tuesday.

Despite heated debate among market analysts on the bank's IPO pricing, its offering was set at 39,000 won, the highest end of the offered price range after the bookbuilding process last week. Based on the offering price, KakaoBank's market capitalization becomes 18.5 trillion won, the third largest among listed financial companies after KB Financial Group and Shinhan Financial Group.

Analyst Kim In of BNK Securities released a report Monday with a sell opinion on KakaoBank shares saying the current price is too high. Kim said the optimal price is 24,000 won, 38 percent lower than the offering.

Kim wrote in the report that KakaoBank's price-to-book ratio (PBR) is calculated as 3.3 times, while incumbent financial companies' average PBR is 0.37 times.

"Retail investors should refrain from subscribing to the bank's shares," Kim said. "There is a high risk of the stocks plunging after listing."

Earlier on July 15 analyst Jeong Tae-joon of Yuanta Securities pointed out that with KakaoBank still being a bank, it would be hard for it to achieve over 10 percent return on equity (ROE).

Analyst Eun Kyung-wan from Meritz Securities also wrote in a report on July 19 that KakaoBank's optimal value is around 15.5 trillion won. This is 3 trillion won lower than the bank's market cap calculated with the offering price of 39,000 won.

Amid continued concerns, KakaoBank's shares were oversubscribed by 183 times during the two-day public subscription period attracting roughly 58 trillion won in deposits for subscription, the bank said Tuesday. The bank will list on the Korea Exchange on Aug. 6.