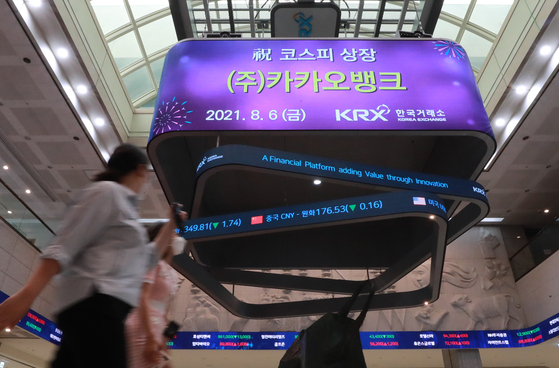 A digital signboard at the Korea Exchange in Yeouido, western Seoul, celebrates KakaoBank's debut on the local stock market on Friday. KakaoBank closed at 69,800 won ($61.1) per share on Friday. [YONHAP]

KakaoBank finished its first day of trading up 79 percent, making it Korea’s most valuable financial company.

Sold in the initial public offering at 39,000 won ($34), the shares closed at 69,800 won on Friday after debuting that morning. Foreign investors purchased a net 225.4 billion won of KakaoBank that day, while institutions bought 98.2 billion won.

KakaoBank’s listing came just as regulators and investors are starting to ask questions about the valuations of IPOs in Korea, and the stock’s early performance suggests that doubts remain about pricing.

It opened 53,700 won, 38 percent higher than the subscription price but far less than the maximum 200 percent recently hit by a number of public offerings in Korea. Trading started choppy, with shares falling 5.3 percent out of the gate before rising for the rest of the day.

Based on 2020 results, the company is trading at about 265 times earnings.

In the first quarter this year, the company posted 46.66 billion won in net profit, up 153 percent on-year.

“The growth and potential KakaoBank showed during the past four years should be evaluated positively,” Kim Ji-young, an analyst at Kyobo Securities said in a report with a buying opinion. “Since its introduction in 2017, KakaoBank is a financial app that is being used most frequently by customers every month.”

KakaoBank is the first internet-only bank that has been listed on the Korea Exchange.

Kakao Pay aims to go public in the fourth quarter of the year.